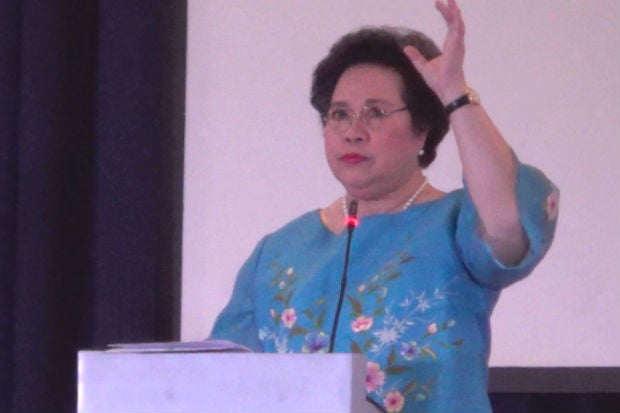 MANILA , Philippines — Senator Miriam Defensor Santiago believes that the Senate hearings on the Mamasapano incident were full of lies.

“Sari-saring sinungaling. Gusto pa akong i-impress…” (A bunch of liars. They just wanted to impress me) Santiago said when she brought up the Mamasapano incident at a leadership forum in Quezon City on Wednesday.

The senator was apparently referring to the Senate hearings that she attended to once.

Defensor said she controlled herself as she listened to the testimonies but her bubble thought was flashing expletives.

The senator though explained that the whole truth could not be expected in a hearing which was heavily covered by the media.

“Many were not telling the whole truth. You know if you tell half a lie, or half the truth that’s no longer the truth. They were telling the truth but from their point of view…” she pointed out.

Nevertheless, Santiago was one of the 20 senators who signed a Senate draft report on the Mamasapano incident that found, among others, President Bengino Aquino III responsible for the January 25 Special Action Force operation where 44 elite lawmen were killed.

The senator explained that she signed the report only to show that she shared the general sentiment of her colleagues in the Senate.

“It does not mean that I agreed with every one of the findings. It simply that I wanted to express the sense of the Senate as a collectivity,” she added.