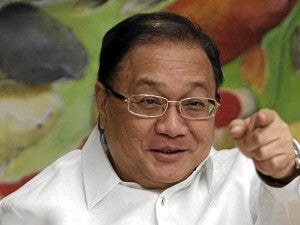 “I want you to think about Mr. Manny Pangilinan for president of the Republic of the Philippines,” Santiago said when she spoke during the Maynilad Leadership Talk held at the University of the Philippines in Diliman.

Asked later during a press conference if her remark was an endorsement of Pangilinan for President, the senator said: “Yes, it is.”

“It is people like him, who should be elected to positions of leadership. It should not be people from highly publicized career because their careers where they are the leading celebrities might blind them to the fact that their qualifications are sufficient for the job. I’m particularly talking about people from mass media, film and television.

“My qualifications are, number one, the president should be honest but that’s the most difficult qualification to determine because there’s no guaranteed test for honesty in public service. Second is professional excellence and the third is academic excellence,”  the senator said.

Santiago, who has been diagnosed with stage 4 lung cancer, has also expressed her desire to run for president if her condition improves.

Asked then about her plan of running for president, the senator said:  “Well, just because it is an option for me doesn’t mean I have to close all options. I’m just saying, thinking aloud to the young people what type of candidate I have in mind.”

“Maybe we (can) run a survey in internet and find out what the educated young think about all these circus in politics. Kaya nagiging corrupt kasi wala silang morale character, mahina ang morale character nila dahilan sa kulang ang edukasyon so this all starts with voter education,” she further said.

Maynilad is under the MVP group of companies. Among the other companies that Pangilinan chairs include PLDT, Meralco, Smart, Metro Pacific and TV 5. ID

Manny V. Pangilinan: ‘I only think about running in the marathon’

Read Next
QC valedictorian tells Krisel Mallari, top award ‘not for you’
EDITORS' PICK
Metro Manila to remain under COVID Alert Level 2 until December 15
IATF tightens border control, suspends entry of fully vaxxed nationals from ‘green’ countries
Villar Group gears up for AllValue Shopping Party on Dec. 3; around P 1-million promos and discounts up for grabs
Duterte open to making jabs mandatory; Cabinet mulls ‘pressuring’ the unvaccinated
Legarda: Ending Violence Against Women, a cause for all
A delightful blessing!
MOST READ
Quiboloy warns of ‘much worse than Omicron virus’ if his ‘persecution’ is not stopped
Marcoleta defends pol ads on ABS-CBN
Omicron poses ‘very high’ global risk, countries must prepare–WHO
Gov’t plans to open COVID-19 vaccination for 5- to 11-yr-olds by January 2022
Don't miss out on the latest news and information.