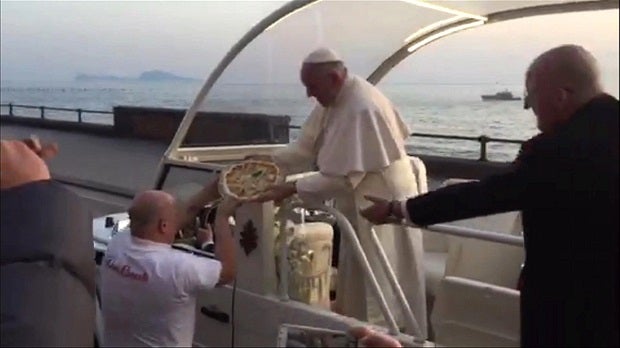 ROME, Italy — Pope Francis, who recently lamented he can’t slip out and get a pizza like he used to, finally got a pie — albeit one hand-delivered to his popemobile.

Pizza maker Enzo Cacialli—pizza in hand—got close to the speeding popemobile amid heavy security and handed the pie to the pontiff in Naples on Saturday, a video made by a co-worker at the “Don Ernesto” pizzeria showed. 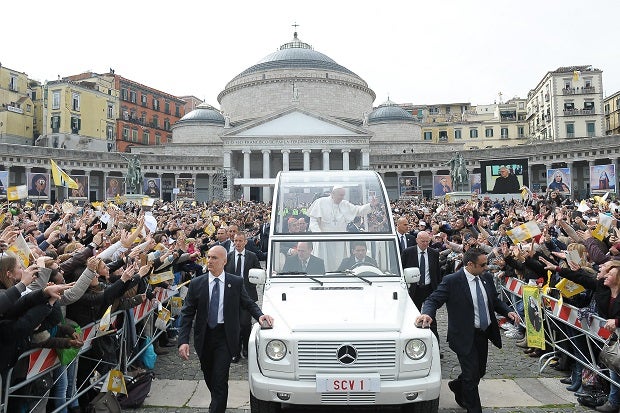 In this March 21, 2015 pool photo, made available Monday, March 23, 2015, Pope Francis, center, is cheered by faithful as he arrives with his popemobile to celebrate a Mass, in Naples, Italy. AP

Cacialli, whose father made pizza for a visiting President Bill Clinton in 1994, told Naples’ Il Mattino that he used yellow tomatoes rather than red to reflect the colors of the Holy See.

He said he was “full of joy that he accepted a pizza straight from my hands.”

In a recent interview with a Mexican broadcaster, Francis said what he misses most being pope is going out to get a pizza. Now, he eats in the communal dining room of the Vatican hotel, serving himself cafeteria-style like the rest of the guests at dinner.

Francis also got some other treats during his visit to Naples: Some biscuits and sweets made by some cloistered nuns who literally mobbed him as he sat in the Naples’ cathedral.

The Naples’ archbishop, Cardinal Crescenzio Sepe, who made a special dispensation so the nuns could come out of cloister for the papal visit, admonished the nuns for their behavior. But he said their cookies are very good and that he eats them for breakfast with milk every day.