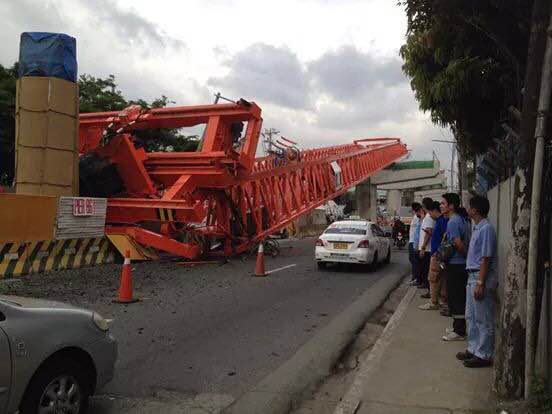 MANILA, Philippines – Some roads leading to the airport were not passable on Monday afternoon after a heavy equipment machine at the ongoing construction of the Ninoy Aquino International Airport (NAIA) Elevated Skyway collapsed along Andrews Avenue and damaged five cars.

In an advisory, the Metropolitan Manila Development Authority (MMDA) warned motorists of heavy traffic along Andrews Tramo at around 3:30 p.m. after a girder launcher fell on the road and hit five vehicles. The 180-ton machine was used to lift heavy parts of the flyover.

The NAIA Expressway Phase 2 is a P15.52-billion project to build a 7.75-kilometer, four-lane elevated expressway from Sales Road in Pasay City to Macapagal Avenue in Parañaque City.

The agency said there has been heavy traffic going to the airports as the west bound lane of Andrews Avenue was totally closed while only one lane on the eastbound was open to vehicles. The NAIA exit to Andrews Avenue was also closed after the incident.

The MMDA added that there was also heavy vehicle volume along Airport Road, Baclaran, Tramo Road, Andrews Avenue and some parts of Edsa in Pasay.

Footages from the closed circuit television (CCTV) cameras of the MMDA revealed that the cars that were hit in the accident were a Toyota Revo, a mini-closed van, a Mazda sedan, a Mitsubishi Montero and a Ford Ranger pickup.

In a radio interview, MMDA Chair Francis Tolentino said it would take until 10 p.m. for the agency to clear the road at the crash area, which was blocked by the heavy equipment.

He added that the cranes of the MMDA could not lift the girder launcher because it was too heavy. Tolentino said they would cut it to smaller pieces in order for them to remove the equipment from the road.