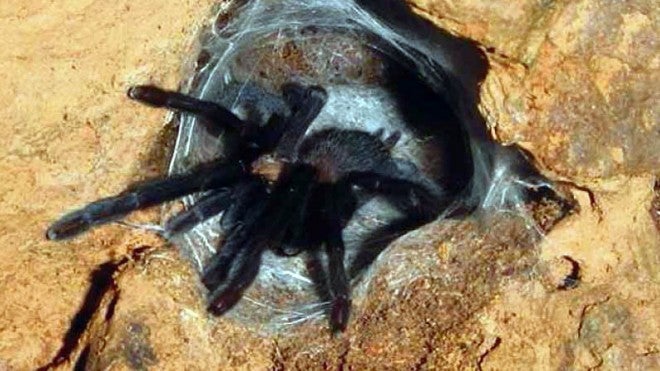 CREEPY CRAWLERS Scientists have discovered rare, hairy tarantulas, like the one shown in photo, that have built colonies inside the less-explored caves in Burdeos town on Polillo Island, Quezon province. JOSEPH RASALAN/CONTRIBUTOR

Scientists from the University of the Philippines Los Baños (UPLB) have discovered what they call “colonies” of a new tarantula species in at least five limestone caves on Polillo Island in Quezon province.

These creepy crawlers, each the size of a child’s fist, have been scientifically named P. kwebaburdeos n. sp. basically because they live in caves in Sitio (settlement) Puting Bato in Burdeos town. “Kweba” is Filipino for “cave.”

“Usually (tarantulas) of the same genus are found (only) on (forest) floor. But these were all over the floor, walls and even the ceilings of the cave. The (scientists’) term was a colony,” Florante Cruz, an extension specialist of the UPLB Museum of Natural History (MNH), said in a phone interview on Sunday.

The MNH announced the discovery of the new tarantula this month, although the species was actually discovered in June 2014 in a “collection trip” led by MNH curators for spiders.

P. kwebaburdeos n. sp. was introduced in the March issue of the Philippine Journal of Systematic Biology, which was released last week.

In the science journal, a copy of which was e-mailed to the Inquirer, Dupo said the P. kwebaburdeos was the fifth species of the genus Phlogiellus known in the Philippines, and the 16th reported in the South and Southeast Asian regions.

The team of scientists was looking for species of amphibians, reptiles, bats, fungi and bacteria on the island, 30 kilometers northeast of Quezon, when “Rasalan chanced upon the tarantula during one of his cave ecology studies,” Dupo wrote.

Philippine tarantulas, she added, are just 1.06 percent of the world’s list of known tarantulas, with the other four species distributed in Manila, Laguna, Quezon, Basilan island and Samar island.

Like any other tarantula, these hair-raising creatures, both male and female, have eight eyes and four pairs of legs, which are covered in a “thick mat of hair.”

Tarantulas are also generally referred to as “bird-eating” since they prey on insects and small birds, but the P. kwebaburdeos n. sp. particularly feed on frogs.

No threat to humans

“Once they grasp the frogs, they bury their fangs and (release) the venom into their prey,” Dupo said in a separate phone interview on Sunday.

But she pointed out that the P. kwebaburdeos n. sp. produced only a small amount of venom and was not a threat to humans.

In case a human is bitten by a tarantula, a problem will arise “only if there’s a secondary infection (from the wound),” she said.

“The presence of several threatened species and endemic species of cave-inhabiting fauna in Puting Bato is already a reason for a call for conservation measures,” Dupo said.

According to Dupo, caves specifically are exposed to “anthropogenic activities, such as pollution and vandalism, because these are usually unprotected.”

The presence of the cave-dwelling tarantulas is also a good “bio-indicator” if there are disturbances in the fauna’s natural habitat.

The same team of UPLB scientists is now working on a follow-up on the tarantulas’ “unusual habit” of cave colonizing, Dupo said.