1,000 detained in India over exam cheating—police

NEW DELHI — Police have detained more than 1,000 people in eastern India over a cheating scandal that saw relatives scale the walls of a school exam center to help students, a senior officer said Sunday.

Images last week showed dozens of people clinging to the windows of a four-story building to pass cheat sheets in the state of Bihar, where more than 1.4 million teenagers are sitting their school-leaving exams. 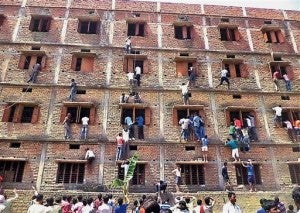 In this Wednesday, March 18, 2015 file photo, Indians climb the wall of a building to help students appearing in an examination in Hajipur, in the eastern Indian state of Bihar. AP Photo/Press Trust of India

Other images broadcast on local television showed school staff and armed police officers standing by as people smuggled in study aids to candidates inside examination centres.

Bihar additional director general of police Gupteshwar Pandey said upwards of 1,000 people have been rounded up and put in jail, but have not been formally charged with a criminal offence.

Instead, they are being made to pay fines ranging from 2,000 rupees ($32) up to tens of thousands of rupees, depending on their involvement in the cheating, to secure their release from lock up.

Pandey said parents and teachers were among the main culprits “who were found cheating or cooperating with the cheating in school exams across the state.”

“More than 1,000 people were detained, half of them were parents and teachers while the other half consisted of friends and relatives,” Pandey told AFP.

“Fifty percent have been released but I believe that the others are still probably in jail,” he added.

“We don’t treat them as hardened, professional criminals. That’s why we release them. Our purpose is to let them know that they have committed a serious offence,” Pandey said.

He added that two policemen have been arrested and ten others have been dismissed from the force for their connection to the cheating.

“Reports of cheating in examinations have drawn a bad name to Bihar… I have issued a strict order to stop rampant cheating in ongoing examinations,” Kumar said on Saturday, according to the Press Trust of India news agency.

It is not the first time that exam cheating has been exposed in Bihar — more than 1,600 students were disqualified in 2013 after similar videos emerged.