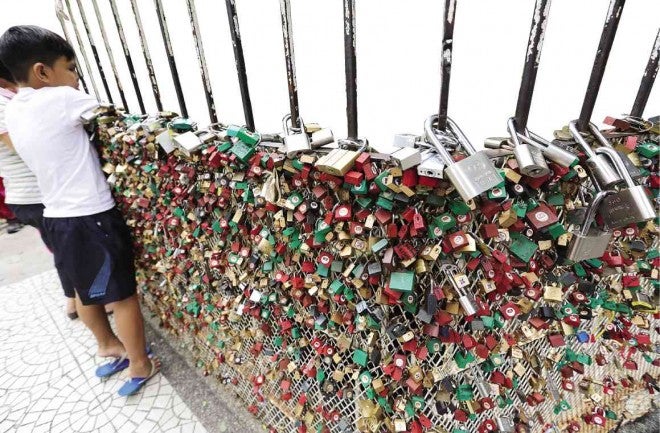 SEALED WITH PRAYERS  The fence around a grotto outside Baclaran Church in Parañaque City is now heavy with “symbols’’ of relationships seeking heaven’s blessing.  JOAN BONDOC

MANILA, Philippines–Love locks have found a new home at a grotto outside Baclaran Church, the newest “lovescape” for people to display and declare their undying love—with God as their witness.

Filipinos have caught up with the trend of affixing padlocks to bridges, park fences and other landmarks as symbols of their unbreakable vows. However, the country’s first love lock location, which is beside a church, is proving to be quite different from the other sites found around the world.

“Some call them love locks, others call them faith locks. But the main thing is that they celebrate different types of relationships,” said Fr. Ino Cueto, the rector of the church also known as the National Shrine of Our Mother of Perpetual Help in Parañaque City.

The trend emerged in the late 1990s in Asia and in the 2000s in Europe. In China, lovers put padlocks on the chains along the trail to Mount Huangshan and throw the key down the cliff.

In Italy, the ritual is performed on Ponte Milvio Bridge in Rome, and its popularity is widely credited to Italian author Federico Moccia, whose book “Ho Voglia Di Te” (I Want You) later became the basis of a romantic film.

In Paris, most of the bridges across the Seine are now heavy with padlocks, the most famous of which are the Pont des Arts and Pont de l’Archevêché which have an estimated 700,000 love locks. In fact, the practice was temporarily disallowed after a part of Pont des Arts footbridge collapsed last year.

In Brooklyn, New York, a “love-lock picking” event was held and locks that were successfully removed were set aside to be used for public art.

Germans fought against attempts by railway managers to remove the love locks on Hohenzollern Bridge in Cologne. In Moscow, authorities had to erect metal “trees” in 2007 so that couples can attach locks there instead.
Secret lovers

Back in Baclaran, whoever started the trend and exactly when remain unknown even to the church officials. But it has clearly caught on and attracted young couples like Mark and Mika, who recently affixed their locks to celebrate their fifth anniversary as sweethearts.

They declined to give their full names, however, as Mika explained: “I’m not allowed to have a boyfriend until I graduate. My parents don’t know about us.”

“But He does,” said Mika, pointing to the church. Mark, meanwhile, said their love lock came with a prayer for acceptance and a celebration of their love.

Bernadette Sauro, Luisa Adrineda and Faith Combate came with three locks held together by a rosary. “We’ve been friends for a long time and we’ve been through a lot. The locks symbolize our strong bond as friends,” Sauro said.

The trio first heard about love locks in France and Korea, but said the “mini-shrine” that has formed in Baclaran is “not just for lovers,” Combate noted.

Evelyn Nieves, a mother of six, said the eight locks she added represent her family: The two largest locks are for her and her husband, while the six small ones are for their kids.
Prayer for united family

“I pray that our family would remain united,” she said. “We are going through a difficult time in our lives now and I pray that we stay strong together.”

The keys—along with coins from those making a wish—are tossed into the pond surrounding the grotto. Aside from padlocks, the fence outside the church has also been strewn with rosaries, scapulars and even rings.

Father Cueto said he doesn’t openly endorse the practice, though he recalled mentioning it once during a service on Valentine’s Day. “At first, we (in the church administration) tried to decide if we will remove them or not. But we eventually thought that they were there for a reason, so we just allowed them,” he told the Inquirer.

Curious passersby often direct their questions to Jun Cuayzon, the grotto’s caretaker. “I hold the key to this place and I also tell people what this is all about. And sometimes, I also have to guard it from those who might take the coins tossed here,” he said.

Cuayson has taken upon himself to fish out the keys from the pond and hang them on one side of the grotto, near a shrub, because “you’ll never know if people want them back. But so far, nobody has returned to get their keys or remove the locks. And besides, most of the locks are now rusty. Good luck to them if they think they can still tell their keys apart from the others,” he said with a grin.

Sidewalk vendors outside the church have long been cashing in. Samal Saharif said he has been earning about P500 a day selling padlocks alone since the grotto became popular.

Another vendor, Jamal Sambajon, even lends permanent marker pens to couples who wish to write names, dates and “lots of hearts” on the locks, he said.

With the trend not expected to wane anytime soon, Cueto is already thinking of the time when all sides of the grotto are already bristling with padlocks. “We don’t want to simply regard them as unimportant. But I suppose the most practical thing to do is just remove them—and we will pray for all the vows and relationships they represent.”