‘Aquino in pink of health’ 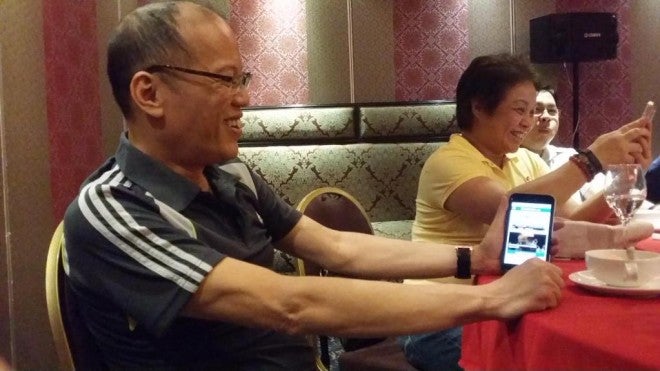 MANILA, Philippines–Has Mamasapano gotten into President Aquino’s nerves? Or have too many cigarettes and too much soda joined forces with pressure from handling the cares of state to bring his 55-year-old body down?

None of the above, if Malacañang can be believed, but at any rate there it was: President Aquino “collapsed” around midnight on Friday—but he did not know.

He found out when his spokesperson called to ask if it was true.

It was just a rumor, of course, but since it concerned the President’s health, Malacañang had to work overtime to assure the public that it was not true and that Aquino was in the pink of health.

A Palace insider told the Inquirer on Saturday that the President was at Bahay Pangarap, his official residence on the Malacañang grounds, when he learned at around midnight that he had collapsed.

Earlier that night, the President had dinner with some of his Cabinet officials, the source said.

“He was so surprised when he learned that there was a rumor that he had collapsed,” the source, who requested anonymity, said.

The President was “fine” during the dinner, the source stressed.

Earlier on Friday, Aquino was in Kawit, Cavite province, to inaugurate the new Emilio Aguinaldo museum.

The President led the flag-raising ceremony, but did not give a speech. He looked well as he walked in the museum’s garden with other government officials.

Who started the rumor that raised questions about the President’s health anew remains a mystery.

The rumor came amid calls for Aquino’s resignation or ouster following a bungled police counterterrorism operation in Mamasapano, Maguindanao province, that left 44 Special Action Force (SAF) commandos dead on Jan. 25 and sunk his administration in its deepest political crisis as he neared the end of his six-year term.

The rumor began with a tweet by a television reporter posted late Friday night, citing an anonymous source who told him that the President “collapsed.”

The tweet triggered a frenzy of reporters’ phone calls to the Palace Communications Group trying to verify the information.

There were scant details. Nothing about where it happened, what time, who the President was with, why he collapsed.

At 12:20 a.m., Lacierda texted and posted a tweet: “I have communicated with the President regarding the rumors circulating that he collapsed and he immediately responded to my text that there is ‘No such thing,’” Lacierda said.

He said he hoped his statement would “settle the issue tonight.”

Lacierda also asked the media to “disseminate the information accurately.”

Speaking on state-run Radyo ng Bayan on Saturday, deputy presidential spokesperson Abigail Valte said that “according to his physician,” the President’s “health is in good condition.”

“We really don’t know where these things come from,” Valte said, recalling that a few years ago a Cabinet official was also rumored to have collapsed.

Valte urged the public to be prudent when disseminating information, especially on social media.

“Let’s just be careful about disseminating unverified information on social media, not just because it’s the President, but about other equally important things as well. You know, sometimes I see people who share [on Facebook] ‘I’m not sure if this is true, but I’ll share it anyway.’ Let’s just not adopt that kind of mentality because it is not fair to the subjects of the [unverified] stories,” she said.

Apparently to dispel the rumor, even after his spokespersons had repeatedly denied it, President Aquino tried to meet the press on Saturday afternoon, but canceled it less than an hour after the Palace had sent out an official advisory.

The NEB is the New Executive Building, which houses the Presidential Communications Operations Office and the press office. It is located on the Palace grounds.

Aquino, the Inquirer source said, canceled the visit after learning that most of the reporters were not in the press office, as it was their day off.

In a separate phone call, Jo Paulo Espiritu, head of the Malacañang Media Accreditation and Relations Office, said Aquino did not want to inconvenience the reporters, many of whom, he learned, would have to rush to the Palace.

In the evening, the President was spotted with Bureau of Internal Revenue Commissioner Kim Henares in a restaurant at Gateway Mall in Cubao, Quezon City, where a friend was celebrating his birthday.

President Aquino’s health has been the subject of news reports since he began his term in June 2010.

Aquino, a bachelor, has not denied being a heavy smoker. He also drinks a lot of soda.

He has been known as a nocturnal worker since his days in the House of Representatives and in the Senate.

Prone to coughing fits, which doctors attribute to his smoking, Aquino also does not have a known exercise regimen.

It is that profile that stirs up a media frenzy whenever word comes that Aquino is ill.

In 2012, for instance, President Aquino canceled a meeting with International Monetary Fund chief Christine Lagarde because he was ill.

He also has had bouts with cough and cold, and at times had to deal with pollen allergy attacks.

On Saturday, Valte said that the President regularly visits his personal physician.

In June last year, there was a question about whether President Aquino’s medical record should be made public, following a series of cancellations of official functions because he had the flu or was down with pollen allergy.

The question came after the White House made public the medical record of US President Barack Obama. Obama’s doctors declared he was in excellent health.

At that time, Malacañang maintained that President Aquino had the privilege of keeping his medical record confidential.

Article VII, Section 12 of the Constitution states that the President’s health requires public disclosure, especially if the illness is “serious.”

“In case of serious illness of the President, the public shall be informed of the state of his health. The members of the Cabinet in charge of national security and foreign relations and the Chief of Staff of the Armed Forces of the Philippines shall not be denied access to the President during such illness,” the Constitution says.

The state of health of Russian President Vladimir Putin was also the subject of media scrutiny recently, following a 10-day absence from public view.

Putin denied reports that he was sick when he made a public appearance on March 15.

Amid rumored collapse, Aquino calls for, then cancels meeting with press