Janet Napoles takes to humor as she faces 93 corruption counts 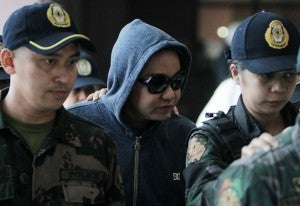 Facing five counts of plunder, 74 counts of graft, and 14 counts of malversation, Janet Lim-Napoles took to humor as she faces trial for all the corruption cases involving three senators and five former solons over the pork barrel scam.

At the sidelines of her bail hearing from plunder Friday, Napoles humored the multiple cases lodged against her for plunder, her children Jo Christine and James Christopher for graft, and her youngest daughter Jeane Catherine who faces a P17.8-million tax evasion case.

Napoles brushed off reports that her daughter Jeane Napoles is back in the country. “Wala pa, pero malapit na. This week or next week,” she said.

But the immigration bureau on Friday confirmed that Jeane Christine is in the country.

“Jeane Catherine Napoles is in the Philippines based on travel records. She was allowed entry because there was no legal basis to prevent her entry into country,” said BI spokesperson Elaine Tan said.

Napoles’ youngest daughter became a social media sensation due to her Instagram photos of a lavish lifestyle while her mother faced allegations of stealing from state coffers.

According to the Department of Justice complaint, the youngest Napoles is liable to pay P17.887 million basic tax deficiencies: P17.461 million for the residential condominium in California for taxable year 2011; and P426,866.67 as co-owner of two Pangasinan farm lots for the taxable year 2012.

Jeane has asked the Court of Tax Appeals to defer the warrant of arrest issued against her for two counts of tax evasion.