Temples are not mini zoos 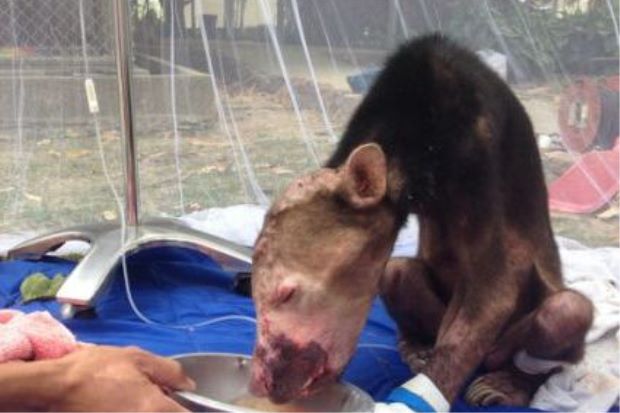 Three-year-old sun bear Kwan being given a drink but died barely a day after she was rescued. (Photo from The Star Online Malaysia/Wildlife Friends Foundation Thailand)

Caged in a dark room laid a creature that no longer resembled a Malayan sun bear. It was severely malnourished with overgrown claws, bloody scabs scattered all over its almost furless body, and it was so weak that it could hardly walk.

This was the condition Kwan the sun bear was in when NGO Wildlife Friends Foundation Thailand (WFFT) found her in a temple in southern Thailand.

Unfortunately, after living for over a year in darkness, three-year-old Kwan died barely a day after she was rescued.

“The bear had been in the room for so long, without any sunlight, that it got weak, skinny, and lost almost all hair,” said WFFT in a statement.

“Since arrival (at WFFT’s centre), we have been fighting to keep the bear alive as it is too weak to eat and has a very low body temperature.”

WFFT said that Kwan stopped breathing twice and was resuscitated, but then passed away at 2:45pm local time on March 16.

How did a Malayan sun bear end up dying slowly in a dark cage at a temple?

WFFT founder Edwin Wiek said in an email interview with that it is normal for Thai people to keep exotic wildlife as pets and later “get bored of them or no longer care for them when they get older.”

“Thai people sometimes give up those animals to wildlife rescue centres or zoos, but very often hand them over to temples as they are “sacred places” where animals should be safe,” said Wiek.

Some temples turn these collections of wild animals into a mini zoo to attract worshippers for donations.

I asked Wiek if the temple monks ever get prosecuted for their crimes, and he said that the authorities “do not like to arrest monks, politicians or influential people.”

WFFT’s first complaint against the temple was made in February 2012.

WFFT handed over information on the temple to the Department of National Parks and Wildlife after investigating the temple following a tip-off.

However, the authorities did not act on the report until August 2014 when they raided the temple.

Wiek said they found a total of five bears, two gibbons, three monkeys, a deer and one otter at the temple.

Kwan was at the temple at the time of the raid but was hidden inside one of the buildings, so nobody knew about her until a few days ago.

But the authorities only took away the smaller animals and left the deer and bears at the temple, much to the dismay of WFFT.

On March 2 this year, WFFT received a tip-off that one of the five bears that was still at the temple had passed away after illness and was being skinned.

The team later visited the temple on March 13 and discover four bears in cages that were “extremely dirty with rotten food inside.”

Rescuers found one bear was seriously ill and needed treatment. Two bears were also treated the next day and they later found Kwan who needed immediate treatment.

According to WFFT’s Facebook page, the authorities have informed them that the remaining temple bears will be rescued within a few days.

Wiek said in his 15 years of rescuing and treating animals in Thailand, Laos and Indonesia, this case was one of the worst.

Furthermore, he estimated that there are at least 5,000 wild animals kept at temples around Thailand.

It breaks my heart to learn that there may be many other abused wild animals like Kwan who are sitting in cages at this very moment.

I hope that Thailand’s Department of National Parks and Wildlife will pay more attention to reports made by NGOs such as WTTF, and take stringent action against perpetrators that are in possession of these protected species.

Religious or wealthy people are not above the law. Justice should be served fairly and equally. If you break the law, you should serve your punishment.