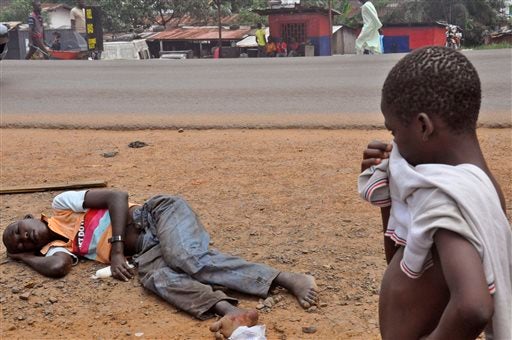 In this Friday, Sept. 12, 2014 file photo, a child covers his face as he looks at a man suspected of suffering from the Ebola virus, in a main street and busy area of Monrovia, Liberia. In a delay that some say may have cost lives, the World Health Organization resisted calling the Ebola outbreak in West Africa a public health emergency until the summer of 2014, two months after staff raised the possibility and long after a senior manager called for a drastic change in strategy, The Associated Press has learned. AP

GENEVA— By early June of last year, the Ebola epidemic centered on Guinea was the deadliest ever recorded. Foreign workers were being evacuated. Top disease-fighters warned that the virus could soon spread across West Africa.

But the World Health Organization (WHO) resisted sounding the alarm until August, partly for political reasons, despite the fact that senior staff in Africa proposed doing so in June, The Associated Press has found. The two-month delay, some argue, may have cost lives. More than 10,000 are believed to have been killed by the virus since WHO first announced the outbreak a year ago.

WHO has acknowledged acting too slowly to control the Ebola epidemic. In its defense, the agency says the virus’s spread was unprecedented and blames several factors, including lack of resources and intelligence from the field. Internal documents obtained by AP, however, show WHO’s top leaders were informed of how dire the situation was. But they held off on declaring an emergency in part because it could have angered the countries involved, interfered with their mining interests or restricted the Muslim pilgrimage to Mecca in October. 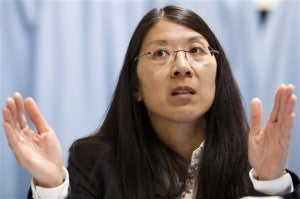 Declaring an emergency was “a last resort,” Dr. Sylvie Briand, who runs WHO’s pandemic and epidemic diseases department, said in a June 5 email to a colleague who floated the idea. “It may be more efficient to use other diplomatic means for now.”

Five days after Briand’s email, WHO Director-General Dr. Margaret Chan was sent a memo that warned cases might soon appear in Mali, Ivory Coast and Guinea Bissau. But it went on to say that declaring an international emergency or even convening a committee to discuss it “could be seen as a hostile act.”

Critics and former WHO staff dismiss that reasoning.

“That’s like saying you don’t want to call the fire department because you’re afraid the trucks will create a disturbance,” said Michael Osterholm, a prominent infectious diseases expert at the University of Minnesota.

The signs this was no ordinary outbreak — the panic, the health workers’ deaths, and the urban spread of the virus — were there from the beginning. Many are recorded in a memo sent to WHO’s Africa director on March 25.

In mid-April, an experienced Ebola expert with WHO’s Africa office wrote to Geneva, with disturbing news that many staffers at a leading hospital in Guinea had been exposed to the virus.

“What we see is the tip of an iceberg,” Jean-Bosco Ndihokubwayo wrote in an email, writing in all caps: “WE NEED SUPPORT.”

The Ebola outbreak erupted at a difficult time for the agency. WHO was also struggling to contain polio outbreaks — which it had declared an international emergency in May — and Middle Eastern Respiratory Syndrome. At a June 2 meeting, one senior scientist warned the agency was “overwhelmed.”

Declaring an international emergency might not necessarily have fixed all those problems — some argue it can create new ones — but it acts as a global distress signal. Dr. Joanne Liu, the international president of Doctors Without Borders, said she had been lobbying Chan to sound the alarm. 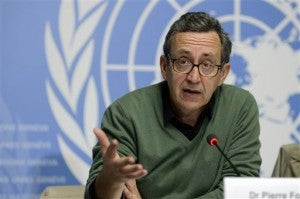 In this Friday, Nov. 7, 2014 file photo, Pierre Formenty, a World Health Organization (WHO) technical officer who specializes in Ebola, speaks during a press conference at the European headquarters of the United Nations in Geneva, Switzerland, describing how the WHO has developed a new protocol to provide information on the safe management of burials of patients who died from suspected or confirmed Ebola virus. AP

“You have the legitimacy and the authority to label it an emergency,” Liu said she told Chan in a July 30 meeting in Geneva. “You need to step up to the plate.”

The emergency was eventually declared on August 8, by which point nearly 1,000 people had already died from Ebola.

WHO’s Ebola response leader, Dr. Bruce Aylward, couldn’t say whether an earlier declaration would have made a difference, noting that “the overall response slowed down” after the emergency was declared. “Had we declared it earlier, it is very, very difficult to say how perceptions would have affected the response.”

Dr. Matthieu Kamwa, a former WHO scientist, describes that kind of reasoning as contradictory. If emergencies don’t work, why declare them at all?

Kamwa says it’s clear the alarm should have been sounded sooner.

“People died because things were not done,” he said.