Michelle Obama gets taste of Japan’s ancient culture in Kyoto 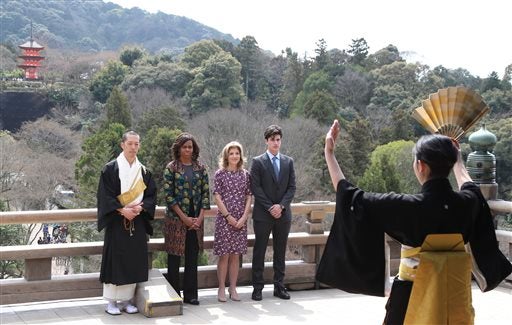 TOKYO—US first lady Michelle Obama is wrapping up a visit to Japan with a taste of traditional culture in Kyoto, one of the country’s ancient capitals.

Mrs. Obama was visiting Kiyomizu-dera, a Buddhist temple founded in 780 on a forested hill overlooking the city and viewing a Noh performance Friday by local college students. The classical Japanese musical drama employs elaborate costumes and stylized masks to symbolize roles of women, ghosts and other characters.

Kiyomizu-dera is a UNESCO World Heritage site and one of Kyoto’s most famous vistas. Mrs. Obama will also visit the 1,300-year-old Fushimi Inari shrine, a place of worship for Japan’s other major religion, Shinto. There are 30,000 such shrines in Japan that venerate the guardian god of abundant harvests, prosperity and family safety.

Students will stage a performance of taiko drumming at the shrine before Mrs. Obama leaves Japan, one of Asia’s richest nations, for Cambodia, one of Asia’s poorest.

Mrs. Obama arrived in Japan on Wednesday for a visit that has focused mainly on cooperation in the “Let Girls Learn” initiative to help girls in the developing world attain educations. President Barack Obama and his wife recently announced the program, which will devote millions of dollars in aid for girls’ empowerment projects.

Cambodia is one of the 11 countries to be included in the “Let Girls Learn” program, which is being run by the Peace Corps, with support from counterpart organizations including the Japan Overseas Cooperation Volunteers.

This is Mrs. Obama’s first visit to Japan, as she did not accompany the president on his state visit last year. The visit is seen partly as a way of making up for her absence then, and as a sign of closeness between the close allies.