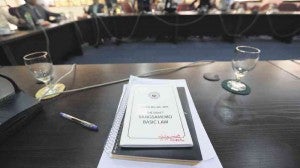 A draft of the Bangsamoro Basic Law lies unread on a table in the House of Representatives after the congressional inquiry on the death of 44 police commandos seems to take precedence; the BBL is tabled in the meantime. LYN RILLON/INQUIRER FILE PHOTO

MANILA, Philippines–Forty-four percent of Filipinos oppose the proposed Bangsamoro Basic Law (BBL), according to the latest Pulse Asia survey, and Speaker Feliciano Belmonte Jr. says the government now needs a “Plan B” for ending the decades-long conflict in Mindanao.

The survey showed that disagreement with the bill was more evident in Mindanao (62 percent) and Metro Manila (52 percent) than in the rest of Luzon (32 percent) and the Visayas (43 percent).

Among socioeconomic groups, disagreement with the bill is the plurality sentiment among Classes ABC (37 percent), D (45 percent) and E (43 percent).

The survey found that only 12 percent of Filipinos were unaware of the BBL.

Belmonte acknowledged Thursday the very real prospect of the proposed BBL being rejected by Congress in the face of stiff public opposition.

“Always a possibility. And politics is the art of the possible,” Belmonte said in a text message.

And what if the BBL is rejected? Does the government have an alternative plan to end the conflict in Mindanao?

Malacañang has not spoken about an alternative plan, always insisting on the constitutionality of the BBL.

He acknowledged that the fallout from Mamasapano has eroded President Aquino’s credibility, likely affecting the chances of the BBL to get congressional approval.

Belmonte said there was still hope for the BBL, noting that “such moral authorities as [Manila Archbishop Luis Antonio] Cardinal Tagle have spoken in favor” of the bill.

The 75-member ad hoc committee on the BBL will resume discussions on the bill in April.

Belmonte and Senate President Franklin Drilon have agreed to pass the BBL by June, before Congress adjourns.