Neda says more than half of region’s people now poor after ‘Yolanda’
By: Joey A. Gabieta - Correspondent / @joeygabietaINQ
Inquirer Visayas / 12:20 AM March 20, 2015 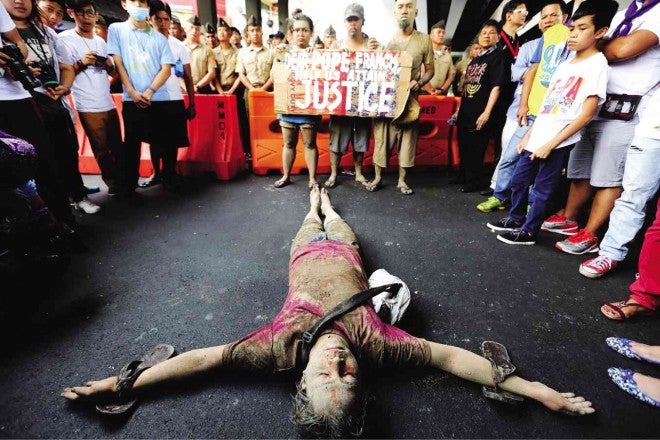 A PROTESTER covers himself in mud and lies on the ground near the Apostolic Nunciature in Manila during a rally to ask Pope Francis, who was in Manila in January, to help survivors of Supertyphoon ‘Yolanda’ get better treatment from the government. JOAN BONDOC

TACLOBAN CITY—The face of poverty in Eastern Visayas could be that of Jessica Gontinian, 38, a single mother of three who had sent her children away to the care of their grandmother so they won’t go hungry.

Jessica, who lives in Barangay (village) 88 in San Jose District, the area hardest hit by monster storm “Yolanda” in this city, had been accustomed to living in poverty, her daily struggle being that of where to find food.

What she thought was pit bottom turned out to be just a ledge leading to a deeper hole when Yolanda struck.

“I was already struggling before Yolanda and when Yolanda hit us, our life turned for the worse,” said Jessica, who earns P100 a day running errands for a neighbor.

Jessica, according to data from the National Economic and Development Authority (Neda), is just one of more than 2 million people in Eastern Visayas wallowing in poverty.

In early 2014, Neda said, poverty level in Eastern Visayas grew to 54.9 percent following the onslaught of Yolanda in November 2013. Poverty level in the region in 2012 was 45.2 percent.

This means that more than half of the 4.1 million people living in the provinces of Leyte, Southern Leyte, Samar, Eastern Samar, Northern Samar and Biliran are poor.

The current poverty level made Eastern Visayas the poorest region in the country.

According to Neda, the main reason for the increase in poverty level was the destruction caused by Yolanda. But, Neda added, higher inflation rate is also another factor. In 2014, the region’s inflation rate rose to 4.3 percent from just 3 percent in 2012.

Yolanda, the strongest typhoon to make landfall in history, pummeled the region on Nov. 8, 2013, killing more than 7,000 people and destroying P130 billion worth of property.

The national government, under its Reconstruction Assistance on Yolanda (RAY) program, had allocated P361 billion. At least P34 billion of the funds were set aside for Eastern Visayas, already one of the country’s poorest regions even before Yolanda.

The Yolanda Regional Investment Program, approved by the Regional Development Council in Eastern Visayas, needs at least P96 billion to repair infrastructure in areas hit by Yolanda and create jobs for people rendered unemployed by the storm.

Uy said Neda had anticipated the increase in poverty level after Yolanda.

He, however, said Eastern Visayas could recover once rehabilitation projects go full swing.

“That is why we want to speed up the recovery work,” said Uy.

In the meantime, the National Wages and Productivity Commission approved on March 5 the proposal of the regional wage board to adjust wages of 100,000 workers in the retail and sugar sectors to raise pay levels to the poverty threshold set at P235 a day.

The wage board, in an order on Feb. 24, increased the daily pay of workers in the sugar industry to P250 from P220.

Workers in the retail industry and services sector will get P235 in minimum wage from the current P229, a raise of P6.