PNP BOI chief: No backtracking, no flip-flopping in Mamasapano report 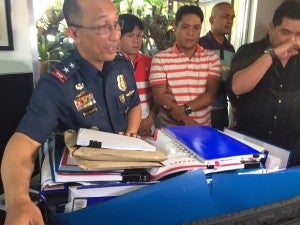 The head of the Philippine National Police board of inquiry (BOI) said on Thursday President Benigno Aquino III could not be held accountable for the disastrous counterterrorism operation in Mamasapano, Maguindanao, since he was “not part of the chain of command” in the 150,000-strong force.

Director Benjamin Magalong, also the chief of the Criminal Investigation and Detection Group (CIDG), reiterated that he did not absolve the President of any liability, contrary to reports in the media.

He also doused speculations that he apparently backtracked from the rather bold position initially taken by the three-member board after meeting with Mr. Aquino and other senior government officials in Malacañang last Tuesday.

“Will stand by it (BOI report). We stood our ground,” Magalong said in a chance interview with reporters at the CIDG office in Camp Crame.

“I stand by our word that we will not change our conclusions and findings in the BOI report. The meeting with the President does not at all affect the report and the investigation we did on the Mamasapano incident,” he said in a firm voice.

The CIDG chief vehemently denied that the board took to task Mr. Aquino for “dealing directly” with then Special Action Force (SAF) chief Getulio Napeñas and then suspended PNP Director General Alan Purisima instead of communicating with Deputy Director General Leonardo Espina, who succeeded Purisima as PNP officer-in-charge.

Citing the PNP Manual on Fundamental Doctrine, he said the sitting PNP chief is considered the highest position in the police organization’s “established” chain of command.

“So what’s his liability? None. We just stated the fact that the President exercised his prerogative, which is true. But he bypassed the chain of command. He dealt directly with Napeñas,” he added.

He took exception to what he called as “irresponsible and malicious” media reports that Mr. Aquino had swayed him into clearing the chief executive after the meeting, which he described as “very straightforward and free-wheeling.”

In an earlier interview, he said the President summoned him to the Palace to seek clarifications in the findings and conclusions contained in the BOI’s 128-page report, which the PNP uploaded in the Internet last Friday.

It was during their discussion, he said, that the President asked him why he was not interviewed by the board regarding his role in Oplan Exodus, a covert police mission to take down Malaysian terrorist Zulkifli bin Hir, alias Marwan, and two other bomb experts.

Magalong said Interior Secretary Mar Roxas, who has administrative supervision over the PNP, admitted during the meeting that he forgot to relay the BOI’s request to speak with Mr. Aquino.

“It’s very unfortunate that we were not given a chance to interview him (the President) for some reasons and circumstances which we could not control,” he said.

“I told him that I mentioned it to Roxas. (The interior secretary) admitted that I really requested for an interview, but I failed to remind him (Roxas) because we had to attend to so many things,” he continued.
RELATED STORY