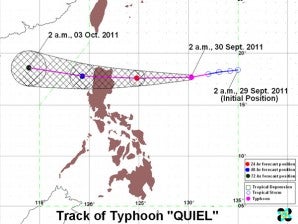 Quiel has also increased its speed to 22 kilometers per hour moving westward and is expected to make landfall over the Cagayan-Isabela area Saturday afternoon, it said.

Storm Signal no. 2 is up in Cagayan and Isabela while Calayan and Babuyan group of Islands, Apayao, Kalinga, Mountain Province, Ifugao, Nueva Vizcaya, Pangasinan, Benguet, La Union, Ilocos Sur, Ilocos Norte and Abra are under Signal No. 1, said Pagasa.

The state-run weather agency is warning people against flashfloods and landslides, as well as storm surges. The southwest monsoon is also being enhanced by Quiel and is expected to bring increased rainfall throughout.

Major dams in Luzon have opened their gates to release water accumulated from Pedring as well as in anticipation of more rains to be brought by Quiel.

Three dams with open gates have reached their spilling level while three others opened their gates even though they have yet to reach the maximum level.

Angat dam, which is 3.22 meters above its spilling level of 210 meters, has three gates open at one meter each.

San Roque dam, which is 0.99 meters above its spilling level of 280 meters, has one gate open at .5 meters.

The three dams who have not yet reached spilling level are Ambuklao, Binga, and Magat, said Pagasa.

Ambuklao dam, which is 1.05 meters below its spilling level of 752 meters, has one gate open at one meter.

Binga dam, which is 0.95 meters below its spilling level of 575 meters, has one and a half gate opening at three meters.

Magat dam, which is still 0.79 meters below its spilling level of 193 meters, has seven gates opening a total of nine meters.

Pagasa estimates that Quiel will exit the Philippines by Sunday afternoon.