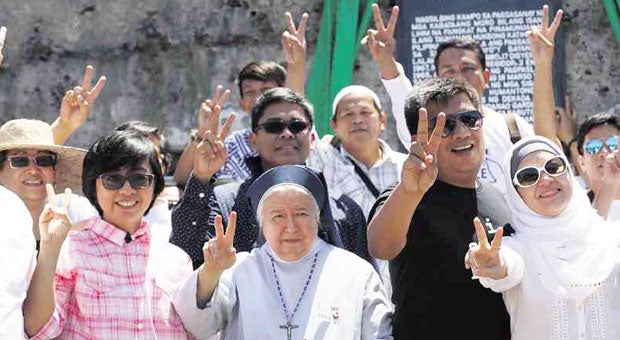 MANILA, Philippines–Peace advocates on Wednesday unveiled a shrine to commemorate the massacre of Moro trainees during the tenure of President Ferdinand Marcos 47 years ago that they claimed triggered the quest for self-determination of the Moro inhabitants of Mindanao.

The broad-based group AllOutPeace, Anak Mindanao Party List, and representatives from the government peace panel on Wednesday traveled to Corregidor Island in Manila Bay to launch the Mindanao Garden of Peace on Corregidor and the historical marker commemorating the Jabidah Massacre that took place on the island almost five decades ago.

The launch comes at a tumultuous time for the peace process between Moro groups and the government, which have dragged on for 17 years now, in the wake of the Mamasapano massacre that killed 44 elite police commandos and more than a dozen Moro rebels and civilians.

Anak Mindanao, which has pushed for the installation of the National Historical Commission of the Philippines-sanctioned marker in Corregidor, said the Jabidah Massacre, which led to the deaths of at least 28 Moro recruits, should remind everyone of the need for peace in Mindanao.

“This is one big step to recognize the injustices done to the Moros, which is still continuing today,” said Norhaya Macusang, advocacy officer of Anak Mindanao. “This injustice will continue unless we get serious and push for peace in Mindanao.”

The Jabidah Massacre took place on Corregidor on March 18, 1968, where at least 28 young Moro trainees, recruited by the military for a plot to invade and reclaim Sabah, were killed when they allegedly tried to escape military training. 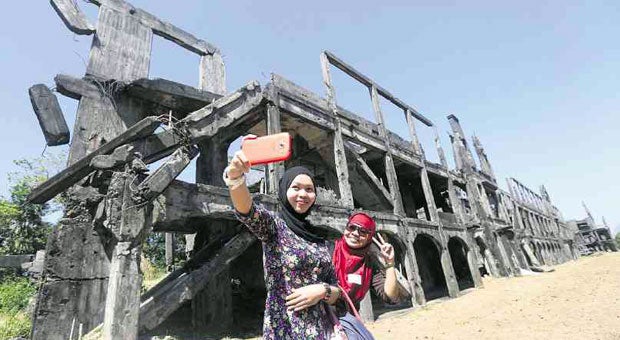 IT BEGAN WITH MARCOS MILITARY PLOT Two Muslim women take a selfie in front of the Corregidor ruins in Bataan, which now sport a new marker on the Jabidah massacre 47 years ago. Soldiers shot Muslim recruits who tried to escape Corregidor where they were being trained for a Sabah invasion. When the Muslims discovered the plot, they rebelled but were executed. Only one survived. The number of deaths has remained unknown. MARIANNE BERMUDEZ

The name Jabidah was taken from the name of the commando unit formed by the government that would supposedly execute “Operation Merdeka,” the military plot to take over Sabah from Malaysia. When the recruits discovered this was their mission, they rebelled but were allegedly executed in Corregidor. Only one reportedly survived the massacre and the official number of deaths has remained unknown.

“The Jabidah Massacre triggered the creation of the Moro National Liberation Front and, in turn, the Moro Islamic Liberation Front. It also united the Moros as they launched their bid for self-determination, which goes on up to now,” Macusang said.

She noted that President Aquino had recognized the need to remember the massacre, and directed the NHCP to research on the facts behind it. This culminated with the unveiling of the historical marker in Corregidor.

Macusang said the massacre should not be forgotten as the foremost reminder of the injustices suffered by the Moro people, and those that could suffer if the peace process is abandoned.

Key moments in the history of Moro insurgency