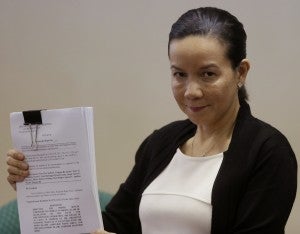 Sen. Grace Poe holds a copy of the Senate probe on the botched Jan.25, 2015, police operation to capture wanted Malaysian Muslim terrorist Zulkifli bin Hir, also known as Marwan, during a news conference Tuesday, March 17, 2015, in Pasay city. The report found the government peace panel “suffering from wanton excess of optimism” and said its members “should start speaking for the country and for the government.” AP FILE PHOTO/BULLIT MARQUEZ

MANILA, Philippines–The senators who investigated the Jan. 25 Mamasapano incident found the government peace panel “suffering from wanton excess of optimism” and said its members “should start speaking for the country and for the government.”

In their report, the Senate investigators noted flaws in the draft Bangsamoro Basic Law (BBL). Twenty senators, including Poe, have signed the report, which will be presented to the plenary when the Senate returns from Lenten break in May.

Excess of optimism blinded them

“The [Office of the Presidential Adviser on the Peace Process (Opapp)] and the peace panel, while advocating peace on a high ground, as it should, are suffering from a wanton excess of optimism,” the report said.

This excess of optimism “blinded” them in negotiating a fair agreement for the government, it said.

The draft BBL is an example of this, it said, given its provisions that would seemingly create a substate in Mindanao and pour too much money into the Bangsamoro region to be created.

“The BBL, in fact, is an exemplar in this regard: While founded on a noble vision of harmony for Mindanao, indications show that there are major areas, including but not limited to the largesse found in its high cost of appropriations, and allegedly allowing the creation of a substate,” the report said.

“Let not the Opapp or the [Department of Justice] be remiss again this time in their sworn duty to protect the interest of our people in the quest for justice for all our fallen heroes,” she said.

Peace based on justice

For the peace efforts in Mindanao to succeed, the people must accept and support this, the report said. Peace must also be based on justice, it added.

“The peace that we seek must be based on justice, where the rule of law reigns supreme, and where criminals are brought before the bar of justice and punished. The blood and heroism of the fallen SAF 44 should not be dishonored by inaction. Our people will accept nothing less,” it said.

There is a need to learn from lessons of the past and include other groups in peace negotiations, the report said.

It noted that when the Autonomous Region in Muslim Mindanao (ARMM) was established following the agreement with the MNLF, many thought it would bring lasting peace to Mindanao. But this has not been the case.

“Perhaps, this failure lies in the fact that the creation of the ARMM was the product of negotiations undertaken by the government with only one of the several armed groups in Mindanao,” the report said.

That part of the report agrees with the view of Ateneo School of Government dean Antonio La Viña that the BBL must conform to the final peace agreement with the MNLF that continues to subsist.

“The MNLF must accept the Bangsamoro as the successor entity of the ARMM that is an implementation measure of the [final peace agreement]. Otherwise, the same will be another line to legally impugn the BBL,” the report said.

Lumad should be brought into the talks as well, especially since the natives have long been marginalized and excluded from peace talks, it said.

“The lumad have their own historical narrative that is as legitimate as that of Bangsamoro people because the lumad, too, are legitimate stakeholders and inhabitants of Mindanao,” it said.

The report also said the “silver lining” to the incident in Mamasapano was that it brought focus on the BBL.

“As we go through the process of deliberating this proposed piece of legislation, all these factors will weigh heavily on our minds and on our consciences. While our country grieves for all those who died at Mamasapano, combatants and civilians, their deaths have brought these issues to our consciousness as a nation,” it said.

Peace panel: Where were you then, Alan?