After confinement in Makati Med, Enrile to go back to PNP hospital 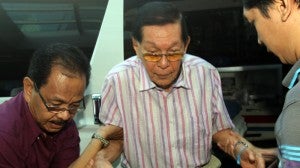 MANILA, Philippines–Senator Juan Ponce Enrile is set to be brought back to the Philippine National Police General Hospital on Thursday after being confined at the Makati Medical Center for pneumonia.

In a Wednesday meeting, Chief Inspector Raymond Santos, the PNP medical spokesperson, said the 91-year-old Senator’s condition has improved since his confinement at the Makati hospital on February 26.

He was rushed to Makati Medical Center due to pneumonia weeks after he celebrated his birthday on February 14. Santos earlier said Enrile was coughing up blood and was suffering from a 39-degree fever.

However, Santos said in a text message to INQUIRER.net that they cannot transfer Enrile without the Sandiganbayan’s go-signal.

“Tentatively, yes, the transfer is scheduled tomorrow. But we cannot move without the court order,” he said.

He was transferred to Makati hospital since according to the PNP, the government hospital is not equipped to address Enrile’s medical condition.

The senator has been under hospital arrest due to his advanced age since July 2014 on plunder charges in connection with the P10-billion pork barrel scam.

Given his frail health, around 16 colleagues of Enrile in the Senate pushed for Enrile’s house arrest.

The senators sent a letter to the anti-graft court’s Third Division urging compassion for the nonagenarian senator.

Senator Enrile has pneumonia; rushed to Makati Medical Center
Enrile got pneumonia from patient in PNP hospital, his lawyers say