Ramos: Aquino liable if he violated chain of command in Mamasapano debacle 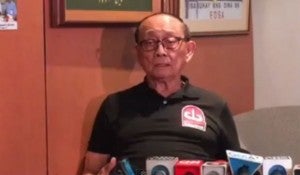 MANILA, Philippines—Former President Fidel V. Ramos said that President Benigno Aquino III can be held administratively liable for the botched operation in Mamasapano, Maguindanao which killed at least 67 people if he indeed broke the chain of command in the Philippine National Police (PNP).

In a press conference Wednesday, Ramos said that Aquino can be held administratively liable if  he violated the chain of command in the PNP as stipulated in Executive Order 226 which states that the doctrine of command responsibility applies to all government agencies, including the PNP and other law enforcement agencies.

The said EO, which Ramos authored in 1995, was designed to shed light on the “dark area” of command responsibility in the PNP.

“Any government official or supervisor, or officer of the Philippine National Police or that of any other law enforcement agency shall be held accountable for “Neglect of Duty” under the doctrine of “command responsibility” if he has knowledge that a crime or offense shall be committed, is being committed, or has been committed by his subordinates, or by others within his area of responsibility and, despite such knowledge, he did not take preventive or corrective action either before, during, or immediately after its commission,” Ramos said, reading Section 1 of the said issuance.

The former President said that the doctrine of command responsibility has been practiced since the government’s establishment.

“There is a chain of command…there is no escaping that under Philippine setting. We have been practicing and respecting command responsibility ever since we have been established as a government,” Ramos said.

In the PNP Board of Inquiry (BOI) report on the Mamasapano incident, it was stated that Aquino broke the chain of command when he directly dealt with sacked Special Action Force (SAF) Director Getulio Napeñas in connection with “Oplan Exodus.”   EO 226 still stands as it has not been rescinded, he reiterated.

However, Ramos said that the EO cannot be used against Aquino while he is still the incumbent president.

“EO 226 can be imposed later on to Aquino. For an incumbent, the only recourse is impeachment,” Ramos said.

In a statement released on Saturday, Justice Secretary Leila de Lima said that Aquino cannot be held accountable on the Mamasapanp clash as Commander-in-chief as the PNP is a civilian agency and therefore does not follow the doctrine of command responsibility.

Aquino responsible for Mamasapano but has yet to consider apology – Malacañang