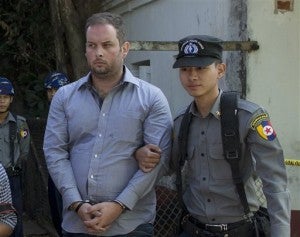 In this Dec. 18, 2014 file photo, a police officer escorts New Zealand citizen Philip Blackwood, left, who is accused of insulting Buddhism, for a court hearing in Yangon, Myanmar. AP

YANGON, Myanmar — A New Zealand bar manager and his business associates were sentenced Tuesday by a Myanmar court to two years and six months in prison for insulting Buddhism over an online advertisement that showed a psychedelic depiction of Buddha wearing headphones.

Philip Blackwood, 32, Tun Thurein and Htut Ko Ko Lwin were given two years of hard labor for insulting religion and six months for disobeying an order from a public servant.

After the sentencing, Blackwood told reporters as he was getting into a police van that he would appeal.

The trial of V Gastro manager Blackwood, bar owner Tun Thurein and employee Htut Ko Ko Lwin came as the predominantly Buddhist nation grapples with a surge of religious nationalism — including violence against members of the minority Muslim community.

About half a dozen monks and hard line Buddhists gathered outside the Yangon court to hear the verdict.

“The verdict is fair. This punishment will deter others from insulting Buddhism or other religion,” said Paw Shwe, a member of a Buddhist organization. 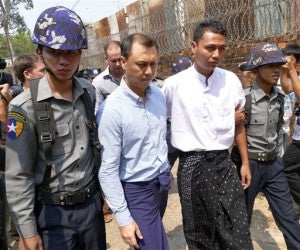 V Gastro bar owner Tun Thurein, second from left, and employee Htut Ko Ko Lwin, second from right, are escorted by Myanmar police officers as they arrive for their trial at a township court Tuesday, March 17, 2015, in Yangon, Myanmar. AP

The three were arrested in December after the image was used to promote the tapas bar and lounge, and have been detained in Myanmar’s notorious Insein prison. The online ad was removed and an apology was posted.

About 90 percent of Myanmar’s people are Buddhist. Perceived insults to the religion are taken seriously, especially in the context of the religious-based violence in the past few years pitting Buddhists against Muslims.

Phil Robertson, deputy Asia director of Human Rights Watch said the three men acted in a culturally insensitive way but they should not be sent to prison.

“What this shows is freedom of expression is under greater threat than ever in Burma (Myanmar) just as the country heads into a pivotal election year,” Robertson said in an email statement.