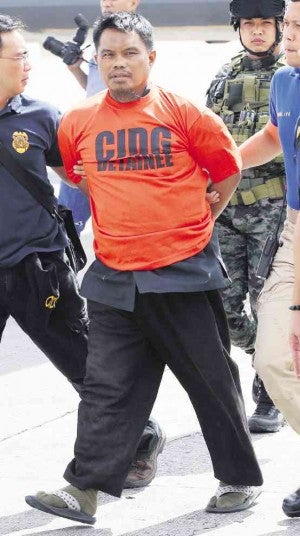 MANILA, Philippines–Coordination among security agencies works, as shown by the arrest on Sunday of the leader of one of three groups of Moro rebels that ambushed Special Action Force (SAF) commandos on a counterterrorism mission in Mamasapano, Maguindano province, on Jan. 25.

Mohammad Tambako, alias “Ali,” leader of the Justice for Islamic Movement (JIM), and four of his men were traveling in a tricycle to the seaport in General Santos City, South Cotabato province, when they were intercepted by Army and police forces around 9 p.m. on Sunday.

Three grenades and two handguns were seized from the militants, who were too surprised to put up a fight, according to the military.

Policemen on the arresting team served Tambako a warrant of arrest issued by Cotabato City Regional Trial Court Judge George Jabido for the Bangsamoro Islamic Freedom Fighters (BIFF) attack on three villages in Midsayap town, North Cotabato province, on Sept. 23, 2013, during which he and his men beheaded a farmer, Ricardo Dionio, and seized 13 schoolteachers as hostages.

The tricycle driver, Ibrahim Manap Kapina, was initially arrested but was immediately released after investigation showed he was merely hired by Tambako and had no connection with the militants.

Armed Forces Chief of Staff Gen. Gregorio Pio Catapang Jr. announced the arrest of Tambako and his men at a news conference at Villamor Air Base in Pasay City on Monday.

Catapang said “excellent coordination” between the military and the police led to the arrest of Tambako and his men, who were flown to Manila and presented to reporters during the news conference at the air base.

“It’s a great accomplishment because we were able to nip in the bud this alleged new group, a breakaway group from the BIFF,” Catapang said.

“I think they are now history and they will have a hard time to recover, if ever,” he said.

A military source involved in the operation to get Tambako said the authorities had help from informants in Maguindanao, one of whom was an Islamic preacher.

The SAF did not coordinate the mission with the military, and the mission, although managing to kill Marwan (Usman and Baco escaped), ended with 44 commandos getting killed in a clash with Moro rebels who ambushed them as they withdrew from Mamasapano.

Catapang said Tambako had to be taken to Manila for inquest proceedings and for security, as Tambako was a “big terrorist leader.”

He said the military was investigating to determine where Tambako and his men were headed when they were arrested.

Maj. Gen. Eduardo Año, commander of the Army’s 10th Infantry Division and former Isafp chief, said Tambako and his men were traveling to the General Santos seaport to take a motorboat and head to a new hideout in a still unknown destination when they were intercepted by the authorities.

Tambako fled Mamasapano three weeks ago after the military launched an offensive against the BIFF, which is believed to be sheltering Usman and Baco.

Lt. Col. Harold Cabunoc, head of the AFP Military-Public Affairs Office, said Tambako had studied in Egypt and his time overseas had enabled him to build up extensive contacts with foreign militants.

Tambako used to be the BIFF’s leader for military affairs.

Abu Misri Mama, spokesman for the BIFF, confirmed that Tambako broke away from the group and formed his own band of militants.

The JIM, believed to have about a hundred fighters, has been linked to several deadly bombings and attacks, including the Jan. 25 clashes with SAF commandos in Mamasapano.

Ibrahim Malang, acting spokesman for the JIM, earlier confirmed that the group was involved in the Mamasapano clash.