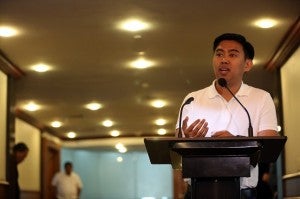 MANILA, Philippines–The Department of Interior and Local Government (DILG) has served the suspension order of the Office of the Ombudsman against Makati Mayor Jejomar Erwin “Junjun” Binay and his fellow city officials over the allegedly overpriced Makati City Hall Building 2.

Brion, escorted by police, entered the left side of the City Hall unmolested before posting the suspension order at the entrance of the City Hall saying that “he was not allowed” to go to Binay who had been holed up in his office since last Wednesday.

Binay’s supporters chanted “Binay! Binay!” as the suspension order was being posted on the city hall’s entrance.

Afterwards, supporters of Binay continued their chanting as they hounded Brion as the official walked back to his vehicle.

Before the service of the suspension order, thousands of police personnel were deployed to secure the DILG team.

Reports said that at least 2,500 members of the Philippine National Police, some of which are members of the elite Special Action Force (SAF), were sent to the Makati City Hall.

National Capital Region Police Office chief Director Carmelo Valmoria said policemen were deployed to “assist the DILG implementing the Ombudsman order.”Valmoria said apart from the SAF men also deployed were members of the the members of the Regional Public Safety Battalion and Civil Disturbance Management from the Southern Police District armed with shields have been sent to Makati City Hall.

“The police deployment was also in anticipation of tension that might arise between the supporters of opposing groups, in case supporters of Vice Mayor Peña arrives,” he said in a text message to INQUIRER.net.

In an interview over DzIQ Radyo Inquirer 990 AM,  Southern Police District Deputy Director for Administration Senior Superintendent Elmer Jamias said that they were ordered to exercise”super maximum tolerance” to the supporters of the embattled city leader who camped at the Makati City Hall Quadrangle.

Jamias did not confirm the exact number of cops deployed on the ground but said that it was “enough to ensure peace and order” in the City Hall.