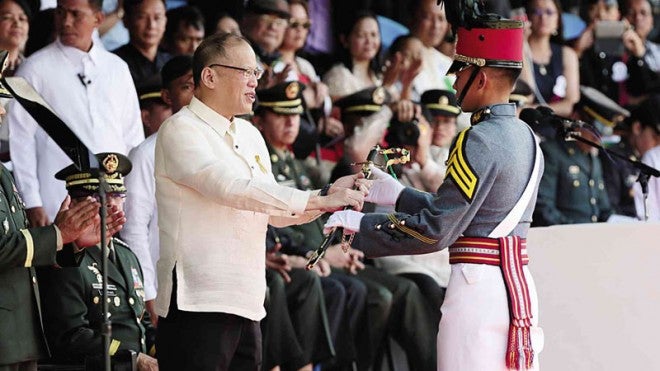 FORT DEL PILAR, Baguio City—The Mamasapano controversy was not in President Aquino’s speech to the graduating members of the Philippine Military Academy “Sinaglahi” Class of 2015 on Sunday.

Instead of addressing the massacre of 44 elite police commandos on Jan. 25 in Maguindanao province, Aquino discussed his administration’s “level-headed and rational decision-making” in dealing with the challenges plaguing the government.

He cited the tension between North and South Korea in 2010, which affected 50,000 Filipinos; the need to move Filipinos in the Middle East away from areas of danger and unrest; and efforts to insulate the Philippines from the spread of diseases such as Ebola and Middle East respiratory syndrome.

It was the Sinaglahi class valedictorian, 2nd Lt. Arwi Martinez of Baguio City, who addressed the specter of war.

“This is an appropriate time for the Filipino people to remember those who sacrificed so much for our freedom. Our interest in pursuing freedom in our country does not necessarily entail that every problem has a military solution,” he said in his valediction.

“History would remind us the most costly mistake of strategy came not from restraint but from the willingness to rush into military action without thinking about the immediate and long-term consequences of waging war.”

While he did not directly refer to the Mamasapano fiasco, Aquino in his speech chose to commend the “extraordinary courage and effective leadership” of 2nd Lt. Jerson Sanchez, a member of the PMA “Siklab Diwa” Class of 2014, who was awarded a Distinguished Conduct Star for leading a small unit against 30 communist rebels in an operation in Sarangani province that left seven insurgents dead and no casualties among the soldiers.

“We do not expect newcomers to become experts immediately, which is why Lieutenant Sanchez is impressive. Not even a year after graduating, he has truly shown great inherent strength and skill in fulfilling his duties,” the President said.

Aquino awarded Sanchez the Distinguished Conduct Star, the second-highest military combat award, at the PMA’s Borromeo Field before Vice President Jejomar Binay, the 172 graduating cadets, the incoming seniors, and nearly 1,000 guests including parents, officials of the government, the military and the police.

The mention of Sanchez’s heroism was an oblique reference to the Mamasapano slaughter even as the nation awaited the President’s explanation to the findings of the Philippine National Police board of inquiry (BOI) on the deaths of 44 members of the Special Action Force (SAF).

Sought by reporters for comment on the President’s speech, Espina dismissed suggestions Aquino’s remarks was a swipe at Napeñas.

“No I don’t think so,” Espina said in Filipino. “We have many courageous lieutenants and there are many new policemen who are capable.”

But former Sen. Panfilo Lacson said Aquino must have been exercising “prudence” when he clammed up and made no mention of the Mamasapano.

The former PNP chief said that the closest reference the President made to Mamasapano was when he mentioned the word “mission impossible” in the context of ensuring that the military would be modernized while commending Sanchez.

Lacson said in a phone interview that Aquino apparently did not want to “belabor” the issue, pointing out that the past three times that the President spoke about it, he drew more criticism and controversy.

“Every speech of the President is now highly anticipated and people are searching for answers and direction,” Cayetano said in a text message.

He noted that in his speech, Aquino mentioned the government’s successes against the Communist Party of the Philippines and the New People’s Army, and that this showed “his resolve to protect the Constitution and the country.”

In his speech, Aquino said that with 14 months left in his six-year term, there were some people who had asked him who would continue “the good work” his office had begun.

“It is clear to all of us only those playing deaf and blind are those who have not felt the massive transformation our country is experiencing,” he said.

Aquino’s praise for young soldier a swipe at Napeñas?