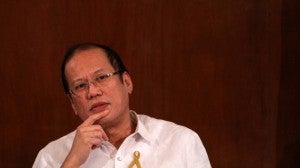 BAGUIO CITY, Philippines — President Aquino listed his government’s accomplishments during the graduation rites of the Philippine Military Academy Class 2014 on Sunday, saying the country has become better than how he had found it at the start of his term in 2010.

Aquino, who has been at the receiving end of criticisms over the way he had handled the Mamasapano debacle on Jan. 25, did not touch on the Philippine National Police Board of Inquiry report on the carnage that claimed the lives of 44 Special Action Force commandos, and instead reminded the public about his government’s gains in good governance and economic growth.  “Our situation now is better than when we started our term. We cleaned up the bureuacracy… Our economy improved.”

The President hailed 2nd Lieutenant Jerson Sanchez, a member of Class 2014, for showing “bravery and effective leadership” despite being young and not being a member of the elite unit.  Aquino’s remarks brought to mind anew police and military commanders who had failed to save the 44 SAF men due to lack of coordination and timely information.

“Sanchez is a young officer, not a member of an elite unit, but he showed bravery and effective leadership,” Aquino said.

The President added he wanted to promote Sanchez to 1st Lieutenant but current limitations in the law prevented him from doing that. (Reports of Nikko Dizon, Philippine Daily Inquirer, in Manila and Inquirer Baguio).