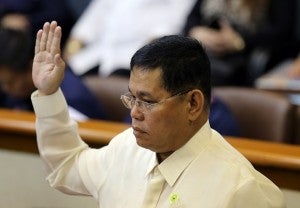 “Along with the rest of the nation, I, too, feel the  pain and sorrow of every SAF (Special Action Force) trooper, their families and loved ones, and the anguish and sadness of every law enforcement  officer,”  Purisima said in a 13-page position paper that he submitted to the Senate on Wednesday, March 11.

“More than anyone else, being a SAF trooper myself, I know the sacrifice each and every member devotes to his job. I’ve been with them, wear the same uniform, we share the same meals, we went through the same experiences and we all commit ourselves to the paramount ideal of being Tagaligtas,” he said.

READ: Where’s Purisiima? He didn’t condole with us, say widows

Purisima said the 44 SAF troopers,who perished in the Mamasapano operation, offered their lives “as the ultimate sacrifice so that we all can preserve our way of life.”

“They, together with those who survived the overwhelming enemy fire, (dedicated) their lives to the success of the mission. In [their] honor, we commit to continue the mission of serving and protecting our nation, our homeland, and our people,” he said.

“The 44 Gallant SAF troopers did not die in vain, they died  as heroes,” Purisima said,” They sacrificed  their lives in line of duty to capture one of the most notorious international terrorists and Jemaah Islamiya member, Zulkifli Bin Hir alias Marwan.

Purisima, who was under preventive suspension when the police operation was launched, said he resigned from his post after the incident. “to allow the President to fully address the situation that is affecting the whole nation.”

“In all these, it must not be forgotten that our heroes were successful. The mission was accomplished. And, as our PNP SAF troopers would say, if they were to be given another opportunity, they are willing to do it again for  the welfare of our country and fellowmen,” he further said.