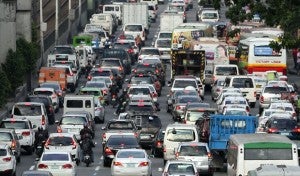 During the Metro Manila Council meeting yesterday, MMDA Chair Francis Tolentino said the Department of Public Works and Highways (DPWH) was scheduled to work on Ayala Bridge in Manila, the Magallanes Interchange in Makati City and parts of Edsa.

The monthlong repair of Ayala Bridge will begin on March 21. Tolentino earlier said that the bridge would be raised by 1.75 meters to give more headroom to barges on the Pasig River and prevent these from hitting the structure’s posts.

Among the major roads to be affected by the complete closure of the bridge are Quezon Boulevard, United Nations Avenue, Taft, Quirino, Legarda, Magsaysay, Recto and Roxas Boulevard.

During Holy Week, the DPWH will also continue reblocking parts of Edsa in Makati and Quezon City, including areas near Trinoma, Cubao, Guadalupe and

Meanwhile, the Magallanes Interchange will be totally closed to vehicles for 12 days during summer for the second phase of its renovation. Maricar B. Brizuela