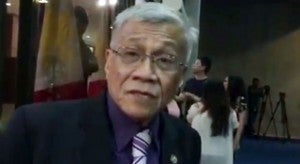 MANILA, Philippines–Akbayan Rep. Walden Bello was supposed to deliver Wednesday afternoon a privilege speech on his withdrawal of support for President Aquino, but his speech will not be entered in the congressional records because he was not able to read it on the floor.

Sulu Rep. Tupay Loong called for the adjournment just minutes after the session of the House of Representatives opened, citing a lack of quorum.

Bello told reporters he did not think the session was cut short to muzzle him.

Felt alluded to when the President called his critics on the Mamasapano massacre “KSP” (kulang sa pansin or attention seekers) in his Monday speech, Bello decided to cut his ties with the administration he and his party-list group helped bring to power in 2010.

‘Sleeping with the enemy’

“It seems that the President’s idea of an ally is someone who follows Malacañang’s line without question and without hesitation. It seems that an ally raising legitimate questions and criticisms is seen as sleeping with the enemy,” Bello said in his undelivered privilege speech, a copy of which he distributed to reporters on Wednesday.

“The President, unfortunately, has a problem listening to people. When it comes to constructive criticisms and suggestions, he is tone-deaf,” Bello added.

He reckoned that the President made an “already tragic event” worse by avoiding questions on his responsibility for the death of 44 Special Action Force (SAF) commandos while being more interested “in expressing his regret at the resignation of Director General Alan Purisima as Philippine National Police chief than getting at the truth.”

Bello said he was floored by the President’s speech on Monday in which he placed all the blame for the failed mission on sacked SAF chief Getulio Napeñas while exonerating and defending himself and Purisima from possible findings of guilt and responsibility by the PNP board of inquiry.

The lawmaker said differences between him and Akbayan’s leaders had cropped up over the party-list group’s continued support for the President.

Bello said he would vacate his post on March 19 or a day after Congress adjourned for its annual summer break.

In his undelivered speech, Bello wished that his colleagues would pass the proposed Bangsamoro Basic Law that would create a Moro region, reopen the Mamasapano probe, pass the bill extending the Comprehensive Agrarian Reform Program and enact the freedom of information bill.

Speaker Feliciano Belmonte Jr. said Bello’s defection from the majority coalition in the House was of no political import.

“Well, numerically, [it is a loss], but really, considering more than 92 to 93 percent of [representatives] belong to the majority in Congress, it doesn’t really matter if one or two drop out,” he told reporters on Wednesday.

Belmonte said no loyalty check was necessary among the 260 or so members of the majority in the 290-strong chamber, amid the fallout from the Mamasapano debacle.

“There’s no need at all for a loyalty check because their actions speak louder than any loyalty check,” Belmonte said.

Bello may have cut ties with Aquino, but his fellow representative from the party-list group felt he should stay on.

“On the point of his remaining as our representative, I personally feel very strongly that he should,” Gutierrez said of Bello.

Asked if Akbayan would deliberate on whether Bello should stay on as representative or whether Akbayan should support his position, Gutierrez said: “I expect the deliberations will cover the full range of issues raised in Representative Walden’s statement, but on the point of his remaining as our representative, I personally feel very strongly that he should.”

Bello said he would remain with Akbayan, but “whether I will remain a representative of the party in Congress will depend on my discussion with the party leadership.”

“Personally, I feel that I cannot continue to remain the congressional representative of the party if our positions on the administration are diametrically opposed,” he said.

Akbayan officials, specifically those ensconced in appointed positions in the Aquino administration, have no plans of following in the footsteps of Bello.

Ronald Llamas, presidential adviser on political affairs, said no one from Akbayan was headed to the exit door like Bello.

“By his (Bello) own words, he admits that a party representative represents the entire position of the party, not your own personal position. According to him, his personal position is to withdraw support from P-Noy, that is not the party’s position,” Llamas said in a text message.

In a text message, Rosales said she was not “officially engaged” with Akbayan to keep the CHR away from partisan politics.

“But from a human rights perspective, I am confident that differences in the party will be treated with respect; that Representative Bello has given his individual position to withdraw support for the President and withdraw from his role as Akbayan representative which are decisions of an individual leader that must be respected and dealt with in line with the democratic processes of Akbayan as a political party,” Rosales said.

Malacañang said it respected Bello’s decision. “That is the personal decision of Representative Bello that we have to respect,” Communications Secretary Herminio Coloma Jr. said.

Senate President Franklin Drilon said the Akbayan party-list group remained to be a “valued ally” of the administration’s Liberal Party (LP) and he did not think it would cut ties with the LP after Bello withdrew support for Aquino.

“(Bello) is the party-list representative but the matter of alliance (of LP) is with the party, and not him, personally,” said Drilon, who serves as LP vice chair.

Sen. Sergio Osmeña III said that Bello was a “man of principles” and that he could see that the latter “has a good reason for breaking away” from the President.

Asked whether he thinks there will be an exodus of supporters withdrawing support for the President, Osmeña merely said that such a move will “not improve or ‘diminish’ the chances of the LP.”

“I’ve always maintained that the intervention of the President will mean little in the coming presidential election. The outgoing President has very little endorsement powers,” Osmeña said.–With a report from Nikko Dizon