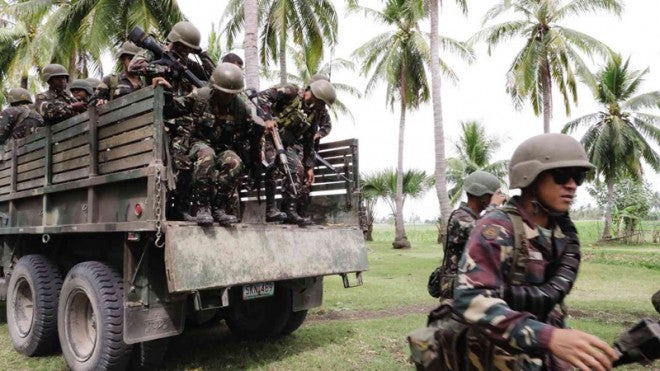 GOING AFTER BIFF Army troops arrive in Pikit, North Cotabato province, on Feb. 25, 2015, after Gen. Gregorio Pio Catapang Jr., Armed Forces chief of staff, ordered an “all-out” operation against the Bangsamoro Islamic Freedom Fighters whose members have been attacking communities in the province since last week. Government forces have killed 73 Moro rebels, including one described as “foreign-looking” who may be among terror suspects sought by the United States, the military said on Monday, March 10. JEOFFREY MAITEM/INQUIRER MINDANAO

DAVAO CITY, Philippines – After two weeks of fighting in the province of Maguindanao, the Autonomous Region in Muslim Mindanao said 64,600 people have fled their homes and have been staying in evacuation centers. Local authorities have warned that if the fighting lasts for more than a month, evacuation centers would run low in relief goods and other supplies.

ARMM’s Humanitarian Emergency Action and Response Team (HEART) said the fighting between Army soldiers and the Bangsamoro Islamic Freedom Fighters has already affected 11 municipalities in the province displacing about 12,920 families.

In the town of Shariff Saydona Mustapha, 1,864 families were displaced while around 2,637 families evacuated in Mamasapano town.
ARMM-HEART also documented 2,119 families displaced in Datu Salibo while at least 1,373 families fled in Shariff Aguak.

In Datu Saudi Ampatuan, 1,062 families were displaced and 939 families evacuated in Guindulungan.

Humanitarian responders were also able to document 1,195 families displaced in Talayan and 712 families fleeing in Talitay.

Meanwhile, around 255 families from Mamasapano town have fled and taken temporary shelter in the nearby municipality of Rajah Buayan.

The regional government is continuing its relief efforts and it is set to send in fresh batches of relief and food rations on Wednesday.
ARMM executive secretary Laisa Alamia said that the regional government’s humanitarian response has been following the standards of the Department of Social Welfare and Development in delivering relief goods, which has a value of P450 per food pack.

“Every time there’s a displacement, we follow the DSWD standards at P450/food pack, excluding logistical and operational expenses,” Alamia said.

The food pack consists of rice, instant noodles and canned sardines and is being distributed per family.

Each food pack is expected to provide food for 3-4 days per family.

Based on the budget of P450 per family pack, the government needs at least P1,938,000 per day just for the food supplies of the displaced residents.

Alamia earlier said the regional government would work hard to provide the needs of the evacuees but with the recent figures of displaced residents, they might run low in supplies if the conflict would last for more than a month.

Read Next
Another quake strikes Digos City
EDITORS' PICK
What to watch out for when selecting a video surveillance solution
Heads may roll at BOC, says Palace if sugar smugglers are allowed to use recycled import permits
vivo brings to the Philippines a powerful smartphone with a slimmer body, the vivo Y02s for only PHP 6,499
DOH reports increase in daily COVID-19 deaths, mostly unvaxxed
Palace: Biggest supermarkets in PH commit to sell sugar at P70 per kilo
House energy committee chair Arroyo bats for cheap electricity
MOST READ
DepEd to give teachers P5K cash allowance within first week of classes
Alyssa Valdez to miss Creamline’s AVC Cup campaign
Brian Poe-Llamanzares receives his PhD in Public Administration
Ambulance driver dies of heart attack en route to pick up patient in Biliran town
Don't miss out on the latest news and information.