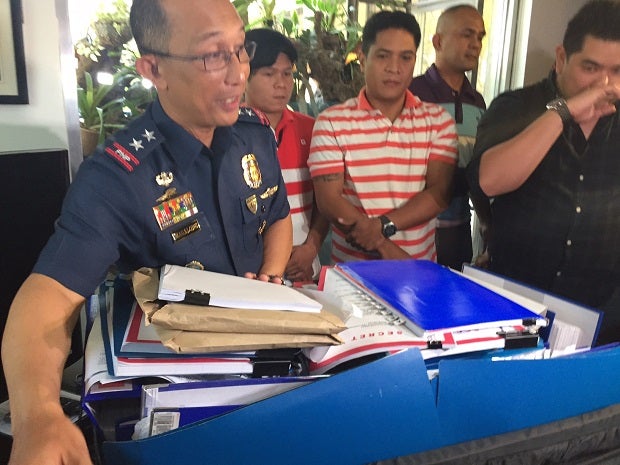 Police Director Benjamin Magalong shows to the media the bulk of papers the PNP Board of Inquiry has gathered and examined in the month-long investigation on the Mamasapano incident that killed 44 policemen. JULLIANE LOVE DE JESUS/INQUIRER.net

MANILA, Philippines – President Benigno Aquino III was asked by the police investigating body to give his account on the Mamasapano debacle. But the country’s commander in chief has not responded to the request.

Police Director Benjamin Magalong, Board of Inquiry chairman, disclosed on Monday they have expressed their intention to include Aquino’s statements in the investigation through Interior Secretary Mar Roxas.

“Secretary Roxas said he will relay our request to the President but after that, we haven’t received any response from them… We haven’t’ received feedback as of the moment,” he said in a press briefing at Camp Crame.

Some sources claimed that Aquino had coordinated with his friend and resigned PNP chief Director General Alan Purisima during the planning and execution of “Operation Exodus” in Mamasapano, Maguindanao.

A day after the deadly operation, Roxas and the PNP formed the BOI.

BOI’s final report was supposed to be submitted on March 6 to PNP officer in charge Deputy Director General Leonardo Espina and Roxas, who will give a copy to the President.

Due to voluminous pieces of evidence the BOI gathered, it asked Espina anew to extend the deadline to March 12.

Magalong vowed a “quality and objective” report amid claims that the BOI would sanitize its findings.

Read Next
BBL timeline moved anew over delay in release of Mamasapano probe report
EDITORS' PICK
Over 3 Million worth of prizes to be won at Smart Padala’s SENDali Manalo Promo!
Gear up and get ready to play with Yamaha Mio Gear
DOH: 28,471 new COVID-19 cases in PH; active cases now 284,458
Acer starts the year off strong with the Aspire Vero National Geographic Edition
On Day 2 of implementation, gov’t says workers now exempt from ‘no vax, no ride’ policy
Metro Manila posts lowest temperature yet this ‘amihan’ season at 19°C
MOST READ
In Batanes, octogenarian dies of COVID-19
Cold-case investigation names surprise suspect in Anne Frank’s betrayal
Emma Stone calls Andrew Garfield a ‘jerk’ after he ‘lied’ about his ‘Spider-Man: No Way Home’ appearance
Czech anti-vax singer dies after deliberate infection
Don't miss out on the latest news and information.