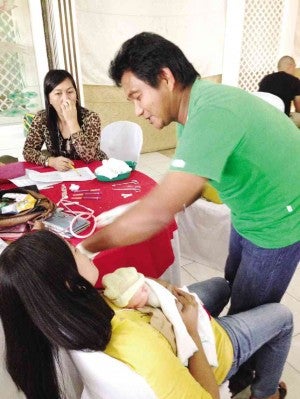 KALAMANSIG, Sultan Kudarat–Tommy Bello is saying goodbye to alcohol. “I thought that using it, before wearing gloves, was enough. Now, it’s bye-bye, alcohol,” he said.

The 44-year-old midwife from Kalamansig, Sultan Kudarat province, learned about an important sanitation procedure during a recent workshop on Essential Intrapartum and Newborn Care (EINC) held in Tacurong City, also in Sultan Kudarat. Thorough washing of hands was needed even if one wore gloves in administering childbirth, he said.

EINC is a set of evidence-based practices recommended by the Department of Health (DOH), Philippine Health Insurance Corp. and the World Health Organization as the standard of care in all births by skilled attendants in all government and private settings.

It is a basic component of the DOH strategy involving maternal, newborn and child health and nutrition strategy to express the Philippinesí commitment to achieve the United Nations Millennium Development Goals 4 and 5 by the year 2015, said Dr. Mariella S. Castillo, a health specialist of the United Nations Children’s Fund (Unicef).

During the Unicef workshopís “return demo,” Bello started with his new learning: Wash the hands longer than singing “Happy Birthday” twice. Count “one, two, three, four, five” for each step–palms rubbing together, in between fingers, fingernails, back of the hands, and wrists.

Bello has been a midwife for 17 years, serving Kalamansig, or five hours of travel from Tacurong. He was a barangay health worker from 1986 to 1993 in his village of Hinalaan.

Encouraged by midwife-friends, he took a midwifery course in the neighboring town of Lebak, and finished it in two years.

In 1999, Bello was assigned to Datu Wasay, a mountainous and remote farming village of 673 families, mostly belonging to the Manobo indigenous people. It takes three hours by motorcycle to get there from the town center on roads that are rough during the dry months and muddy when it rains.

For 14 years, Bello has been the lone midwife for Datu Wasay.

“I always wanted to help the poor,” he said. That help, however, was not always welcomed in the village. “It was really difficult when we started. People resisted facility-based childbirth,” he said.

In 2007, the village chair, Jesus Bisana, implemented a strict “no home-based childbirth” policy, which drew opposition from the community. “The residents did not understand,” Bello said, noting that women giving birth were usually assisted by “hilot,” or traditional birth attendants.

That same year, Datu Wasay recorded two maternal deaths. In the Philippines, the Unicef estimated maternal deaths yearly at 221 per 100,000, or close to 5,000 mothers.

“Thirteen women die daily giving birth, of which postpartum hemorrhage continues to be a major cause of maternal mortality,” Castillo said.

In 2008, Bisana paid for his childbirth stance; he lost in his reelection bid. His successor, Nestor Magon, took off from what he thought was a popular demand and suggested that the village birthing station be closed, but he withdrew his proposal after being threatened with cases to be filed against him in the Ombudsman.

“We also made him understand the importance of the birthing station. He is now supportive of us,” Bello said.

To win over the residents, the barangay health center made a “special offer” to pregnant mothers from 2008 to 2009. “We offered delivery for free,” Bello said.

The village officials, led by Magon, also imposed a P2,000 penalty to be shouldered by both mother and hilot in home-based birthing. By 2010, they introduced the P500 fee for delivery.

“Some still could not afford this,” Bello said, prompting the health center to initiate another promo–the ‘lay-away’ plan.” Months before their due dates, pregnant mothers would pay P50 or P100 whenever they have money.

In 2013, the delivery fee was increased to P1,000. And to appease the disemployed hilot, the health center paid P500, or half of the fee, to whoever would bring in a pregnant mother.

For the hilot, however, itís not all about the money. Bello cited instances when they did not get any amount because the families were so poor. “The hilot themselves look for ways to help the mothers,” he said.

With community resistance finally lifted, the midwife said, it became easier for him to implement “Unang Yakap” (First Embrace), a set of procedures to ensure the welfare of both mother and baby.

The sequence includes thorough drying of the baby, immediate skin-to-skin contact between mother and baby, properly timed clamping and cutting of the umbilical cord, and initiation of breast-feeding.

Since December 2012, health service providers in Kalamansig have been implementing Unang Yakap.

Dr. Marife Aruta, the municipal health officer, said one of the “visible effects” of the program was the 44-percent “exclusive breast-feeding Unang Yakap mothersî last year compared with a ìmuch lower number two years ago.”

Aruta said the initiation of breast-feeding after birth had persuaded mothers to continue with it even when they got home.

Bello may have said goodbye to alcohol, but not to Datu Wasay. “There’s still a lot to do,” he said.