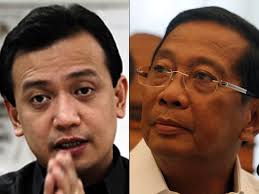 MANILA, Philippines–The Ombudsman’s preliminary investigation of alleged anomalies in the construction of the Makati City Hall Building II shows that the issues raised against the P1.2 billion project were not purely products of politicking as the Binay camp had alleged, according to Sen. Antonio Trillanes IV.

Trillanes said the development indicates that those making the allegations of irregularities have been able to provide evidence that warrant further action.

“It disproves their assertion early on that this is purely political. It’s proven that that’s not the case,” Trillanes said Saturday.

Trillanes had initiated the probe of the building project in the Senate. The Senate Blue Ribbon subcommittee also delved into other controversies involving Vice President Jejomar Binay.

A special panel of Ombudsman investigators earlier filed a graft and malversation complaint before the Office of the Ombudsman against the Vice President, Makati Mayor Jejomar Erwin Binay and 22 other Makati government officials for the alleged irregularities in the building project.

The Senate had forwarded all its documents on the Makati City Hall Building II project to the Ombudsman, and Trillanes expects it to look at all the aspects of the case.

He also said the Senate Blue Ribbon subcommittee has already concluded the portion of its inquiry on the Makati City Hall II Building and would focus on other anomalies involving the Vice President in its subsequent hearings.

In the Makati City building project, the subcommittee’s main witness had been former Makati Vice Mayor Ernesto Mercado, erstwhile ally of the Binays.

Mercado had alleged that the Vice President received kickbacks from infrastructure projects in the city when he was its mayor.

Other former Makati officials had also testified that then Mayor Binay ordered the rigging of contracts for the city’s infrastructure projects to favor certain suppliers.

The Ombudsman investigators, in their own complaint, had alleged that procurement and award of the Makati City Hall Building II project to Hilmarc’s Construction Corp. was marred by irregularities.

Falsified documents were supposedly used to show the publication of the notices to bid and the purported participation of two losing bidders. One of these bidders had denied participating in the bidding, while the existence of the other bidder could not be established, the complaint alleged.

The complaint also alleged that the design and architectural services for the building was awarded to MANA Architecture and Interior Design Company without public bidding. The bidding for the building’s five phases was also supposedly conducted without a detailed engineering plan, contrary to procurement laws and regulations.