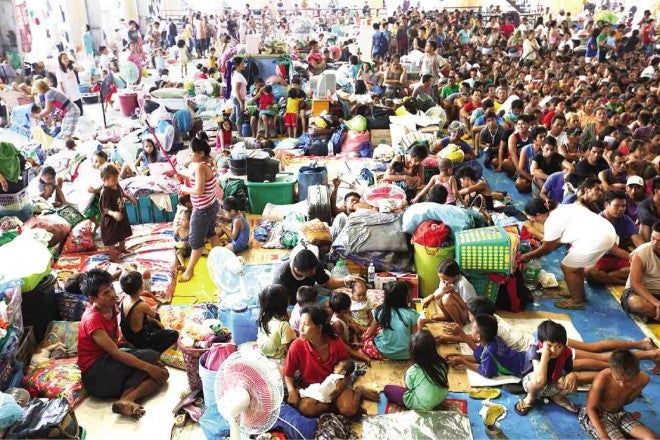 NOWHERE TO GO Families displaced by the Parola Compound fire still pack an evacuation center in Del Pan, Manila, on Friday, four days after the 12-hour inferno that destroyed their shantytown.

Many fled inland to safety, but there were also residents of Parola Compound in Manila who were forced to retreat to the filthy waters of Manila Bay as they saw their homes go up in flames Monday night.

Four days later, the images of her two children, aged three and eight, clinging to styrofoam rafts to stay afloat remained seared in the memory of Dolores Cabillos. “We were confident that the fire wouldn’t reach us since it started far from us and the firemen had already arrived,” the 29-year-old mother said.

Yet there she was on Friday among the thousands still cramming the Del Pan evacuation center, lining up for relief goods and then returning to the family huddles on the pavement, with nothing but sheets of carton for mats.

Two VIPs arrived in the morning to hand out food packs, provide services, and offer hope: Manila Mayor Joseph “Erap” Estrada spoke of plans for their “on-site relocation” (meaning they can be given new homes in the same area) while Makati Mayor Jejomar Erwin “Junjun” Binay Jr. also brought along a team of medical workers and water filtration equipment.

“Part of the [burned] property is owned by the National Housing Authority,” Estrada explained in an Inquirer interview. “We are negotiating with them through the help of Vice President [Jejomar] Binay (the Makati mayor’s father). As much as possible, I want on-site relocation for them. Many of their breadwinners work in the pier, as drivers, stevedores. Transportation will be a concern if they are relocated far from here.”

The Manila city government had allocated P8 million for the affected 4,000 families who will receive cash assistance at P2,000 each, Estrada said.

Still, across the crowded shelter, the buzz was thick with spite and suspicion over the cause of the March 2 shantytown fire that raged for 12 hours in the Binondo side of Parola Compound. (A smaller fire broke out in the afternoon of March 3, this time on the Tondo side.)

Talk remained rife that it was an arson job meant to force mass evictions and that the firemen purposely delayed action.

“What’s the decision?” asked an angry Zosiel del Rosario, 21. “Are we going back or not? We are willing to be relocated and we won’t object. That’s better than getting that done to us through violence.”

According to Manila Police District director Chief Supt. Rolando Nana, a cargo handler identified as Emmanuel Amador was shot and beaten to death by some of the affected residents on suspicion that he and two cohorts tried to start “another fire” on Wednesday also in Parola.

The city’s fire marshal, Supt. Jaime Ramirez, maintained that his men did everything to contain the inferno but that the residents themselves clogged the alleys and slowed the entry of fire trucks into the burning neighborhoods.

Ramirez said that based on the investigation, the fire was caused by a kerosene stove left unattended at the house of Leonardo Edgar. “They were cooking balut while drinking liquor and they forgot about the stove,” Ramirez said. With a report from Maricar Brizuela