Men walking tall in high heels are no heels 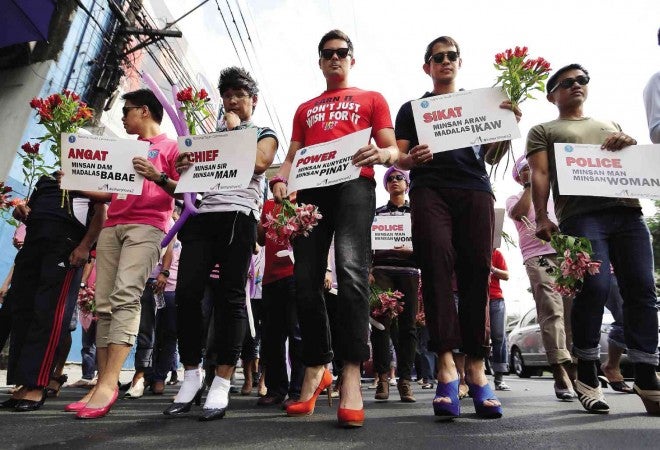 HEAD OVER HEELS Actor and National Youth Commissioner Dingdong Dantes (center) and National Youth Commission Chair Gio Tingson (second from right) bravely march in heels from Banawe Street to the Welcome Rotunda in Quezon City on Friday in the event called “In Her Shoes.” The march, meant to show men’s solidarity with women in celebration of Pinay Power in time for International Women’s Day tomorrow, is also described as a tribute to women balancing their roles as wife, mother, worker and leader. RAFFY LERMA

LA TRINIDAD, Benguet—To show solidarity with women on International Women’s Day on Sunday, 15 men from government agencies here walked almost a quarter of a mile “in her shoes.”

Perched awkwardly in women’s high-heeled shoes, 15 male employees—five each from the municipal government, the National Police Commission and the Armed Forces in Kalinga—walked 400 meters from Gate 2 of Benguet State University to the town hall here.

“Painful feet” was the fundamental lesson of this exercise, said Commissioner Percival Cendaña of the National Youth Commission (NYC), which had staged the event “In Her Shoes” for the second time.

Cendaña, who joined the walk in a pair of beige high-heeled shoes, said that men teetering on women’s footwear vicariously experienced how it was “to strike a balance as wife, mother, office worker and family leader.”

“In Her Shoes” is an international action to promote women’s rights, the NYC commissioner said. “We want men to reflect for a few moments and walk a mile in the shoes of a woman,” he added.

The La Trinidad march was the Benguet leg of a national campaign held simultaneously in Quezon City, Cebu and Davao City.

The soldiers, who are stationed at Camp Henry Allen in Baguio City, are members of the Alpha Mapagmahal Company of the Army’s 5th Division based in Gamu, Isabela province.

“We had a difficult time finding women’s shoes that fit us. Our toes kept slipping out of the shoes we had initially bought,” Bartolome said. In the end, he said, they had “to borrow high heels from women advocates who participated in the march.”

The short walk was trickier for other men who wore socks, as it forced them to walk with a limp. “My feet kept sliding forward, so my whole weight rested on my toes,” said one march participant.

Another described the event as the most painful experience of his life. “Each step I made [caused] pain to shoot up from (my shinbone),” he said.

Cendaña said the pain was meant to show men what women have to endure when they “subscribe to men’s agenda of what beauty [should be].”

Rosamund Pike, who starred in the movie version of “Gone Girl,” was quoted as saying that she lives “in hope that one day we will view high heels with the same horror with which we view foot-binding.”

Women in high-heeled shoes are perceived to look sexier than when they wear flat shoes, a perception supported by a recent study published in the academic journal “Evolution and Human Behavior.”

According to the study by several psychologists in the UK, “Wearing high heels makes women look more attractive by making them more feminine, as the effect of heels was to exaggerate some sex-specific elements of female gait including: Greater pelvic rotation, increased vertical motion at the hip, shorter strides and higher number of steps per minute.”

Cendaña said men often assume that today’s women live in a better social environment because they are educated and are now better suited for jobs previously associated with men.

But women still deal with “deep-seated biases,” the NYC official said, because they are required to take charge of family matters while juggling a career or a business enterprise.