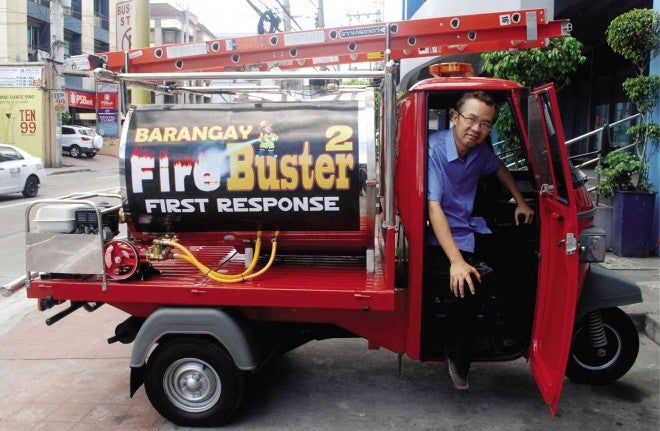 THE ‘MINI’ WITH THE MEANS Antonio Andes Sr. with his Barangay Fire Buster, which he offers as a solution to problems often encountered by fire fighters in congested urban areas. ARNOLD ALMACEN

MANILA, Philippines—Not a few fires in urban areas have caused widespread damage and dragged on for hours because firetrucks could not even pass through narrow, twisting alleys leading to the burning homes.

A businessman and inventor, himself a resident of a crowded neighborhood in Taguig City, believes he can offer a solution by building a three-wheel firetruck the size of a subcompact car, small enough to squeeze through five-foot-wide passageways.

Antonio Andes Sr. of Palar Village recently sold his ‘’Barangay Fire Buster” (BFB) to a village in Zamboanga City and hopes to further develop his creation with the support of the Bureau of Fire Protection. An earlier model of the BFB was tested by the Department of Science and Technology (DOST), which then granted him an invention patent and a pledge of support.

“The majority of fires happen in squatters’ areas where big fire trucks cannot immediately enter,” said Andes, 50, a native of Legazpi City and the former president of the Bicol Inventors Society. “You just feel helpless as you could not do anything but wait for the fire trucks to arrive.”

The first nine BFB units rolled out of his workshop starting in 2008, but these early models—a tricycle fitted with a pressurized water tank—easily broke down as they relied only on a Chinese-made 150cc Dayun motorcycle engine to move the heavy payload.

The new, “more durable” unit, which Andes unveiled last week in time for Fire Prevention Month, runs on a 435CC Piaggio diesel engine from Italy. It can carry 500 to 700 liters of water and comes equipped with an aerial ladder and two 30-meter long hoses with a spray distance of up to 50 meters.

“A lot of people complained about the maintenance of the first model so I stopped producing it,” he said. “I was able to find the proper engine only last year when it became available in the country.”

The first order for the new BFB, currently priced at P595,000, came from the local government of Barangay Santa Maria in Zamboanga City.

The DOST’s Technology Application and Promotion Institute, he said, pledged to extend financial assistance for the BFB’s mass production should there be a considerable demand for his invention from local government units.

With business partner Rey Cheong, Andes created the BFB for the “peace of mind” of residents in hard-to-reach areas. “It’s like a first-aid solution to contain the fire and prevent further damage while the big fire trucks are still on their way. Residents, instead of running away from the fire, can now help each other and put it out as early as possible.”