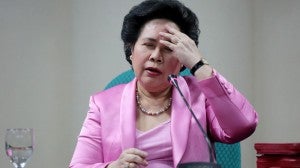 MANILA, Philippines — “Just boot them out of office,”  was Senator Miriam Defensor-Santiago’s advice on Thursday as she dismissed as “baseless” the  treason complaint  filed against President  Benigno Aquino  III and  other  officials  in connection with the botched  Mamasapano  operation and the proposed Bangsamoro Basic  Law (BBL).

Santiago said the treason complaint filed by former immigrations commissioner and assemblyman Homobono Adaza at the Office of the Ombudsman against Aquino and other government officials was “baseless” as they were being  punished for supposedly making a wrong judgment.

“It is too far away from the language of the Penal Code. Treason is a crime punishable by Penal Code, it cannot fit under the language employed there in definition of treason. Of course, it basically is a treacherous behavior against the country,” she said in an interview at the Senate on Thursday.

Asked then if the complaint was baseless, Santiago said: “That is baseless because they are being punished for what seems to be a failure of judgment. They made the wrong judgment, that cannot be treason.”

“Treason means an overt act, there is a specified act that can be proved in court that shows he has no loyalty left for the Philippines,” she pointed out.

At most, she said, those liable for the Mamasapano operation and the BBL could be charged with “poor judgment in office.”

“And in that way, the remedy is political not legal. You cannot sue them in court. Just boot them out of office,” Santiago said.

The senator expressed confidence that Adaza’s complaint would just be dismissed by the court.

Aquino, other execs charged with treason