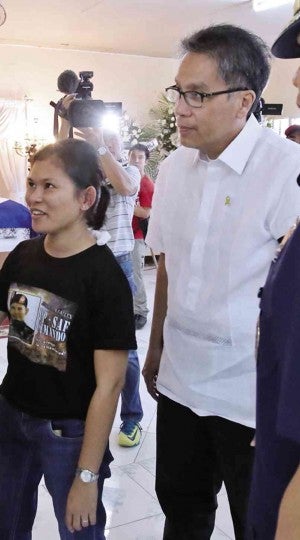 INTERIOR Secretary Mar Roxas condoles with the widow of PO1 Romeo Cempron, one of the Special Action Force men killed in Mamasapano town, Maguindanao, during the wake for the slain policeman in Cebu City. JUNJIE MENDOZA/CEBU DAILY NEWS

BAGUIO CITY—Families of Special Action Force (SAF) commandos slain in an operation to capture or kill international terrorist Zulkifli bin Hir, alias “Marwan,” had been advised to set aside hatred and not be incited to violence by people with motives other than the quest for justice.

Zambales Gov. Hermogenes Ebdane, a former SAF chief, said the families of the slain SAF men should not let themselves be incited to violence by people with questionable motives.

“Avoid fanning the flames of hate since anger will not do any good. We need to take hatred out,” Ebdane said in a statement.

Anger as a result of the Mamasapano clash could also inflame more violence and mistrust, he added.

“Let us look for collective solutions instead of fault finding and finger pointing. It is high time to set aside partisan politics so we can focus and attend to the problem with the right frame of mind,” he said.

Bishop Joel Pachao on Monday addressed relatives of 14 of the slain SAF men during rites for the turnover of financial assistance to them from a fund drive by Cordillerans who are in the country and abroad.

Bishop Pachao said while losing a loved one is painful, harboring hatred will only make the situation worse.

“It is sad and painful to lose a loved one. But it is sadder when our loved ones are killed by our fellow Filipinos. I say this not to create hatred for the people involved in the conflict. I say this to implore all of us to pray for peace,” he said.

The fund drive raised P1.279 million from donations of Cordillerans. Each family received an initial P90,500.

Pachao told the families to entrust their loss to God. “Even if we lost our loved ones, I ask of you that we work together for peace, unity and understanding in our country so that no child will be orphaned and no wife will be widowed again,” he said.

Julie Cayang-o, wife of PO1 Gringo Cayang-o, said she is grateful for the support they have been receiving from the community.

But more than the financial assistance she highlighted the moral and spiritual support and guidance that the families received.

“I believe in what our pastor had said—we have one life and that it should not be wasted on anger and hatred. We should use this experience as a shield to go on with our lives,” Cayang-o said.