ANALYSIS: Iran in, US out of offensive vs ISIS 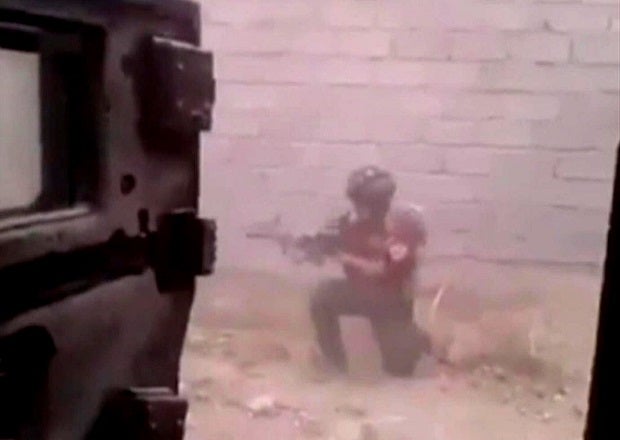 This file image made from video provided by an Iraqi soldier made available on Saturday, June 14, 2014, shows a member of Iraqi Special Operations forces in a firefight with militants from the al-Qaida inspired Islamic State of Iraq and Syria (ISIS), later known as the Islamic State group, in Tikrit, Iraq. The success – or failure – of the latest effort to retake Saddam Hussein’s hometown will serve as a test for Iraqi forces and powerful Shiite militias as they prepare to launch major operations to take back northern Iraq. But challenges remain for Iraq’s embattled military which is still working to recover losses suffered during the Islamic State’s initial onslaught last year. AP

BAGHDAD, Iraq — Iranian-backed Shiite militias and Sunni tribes have joined Iraq’s military in a major operation to retake Saddam Hussein’s hometown from the Islamic State group, while the U.S.-led coalition has remained on the sidelines.

The campaign for Tikrit is a dress rehearsal for the real contest: The fight to recapture Mosul, Iraq’s second-largest city and the extremists’ biggest stronghold. But can a large-scale ground offensive alone succeed, without U.S.-led air support?

The Tikrit operation is aimed at stopping Islamic State of Iraq and Syria (ISIS) fighters from closing in on Samarra, a Shiite holy city just to the south that tens of thousands of Shiite militiamen rushed to defend during the extremists’ blitz across northern Iraq last June.

One of the biggest campaigns in the heart of militant-controlled Iraq, the battle for Tikrit involves a complex mix of several Iraqi military brigades and thousands of Shiite militiamen and Sunni tribal fighters. Directing the offensive with the aid of dozens of Iranian military advisers is a powerful Iranian general, Ghasem Soleimani, commander of the elite Revolutionary Guard’s Quds Force.

Glaringly absent are the U.S.-led coalition forces whose air campaign since last summer has nearly halted the Islamic State rampage across Iraq. Pentagon spokesman Army Col. Steve Warren said this week that the U.S. is not providing air power in the Tikrit operation “simply because the Iraqis haven’t requested us to.”

Liberating the city without the backing of coalition airstrikes will put Iraq’s security forces to the ultimate battle-readiness test since any operation to recapture Iraq’s densely-populated cities — including Mosul and Fallujah — will have to rely almost entirely on ground forces to minimize civilian casualties.

However, more of a concern for the U.S.-led coalition is Iran’s prominent role in the fight against the Islamic State militants. Iran has long been influential in Iraq, but never so much so as over the past year, when the Iraqi military collapsed in the face of the Sunni extremists’ onslaught. Iraqi officials have noted Iran’s quick response to their urgent requests for weapons and frontline assistance even as they accuse the coalition of falling short on commitments on the ground.

Embedding coalition advisers and forward air controllers — the officers who call in airstrikes — with Iraqi military units presents a twofold challenge. Frontline positions would put their lives in danger at a time when risk aversion is at its peak. But it also raises the potential for coalition forces and Iranian soldiers to share a battlefield, a politically untenable prospect for the U.S. given the uncertain future of ongoing nuclear talks with Tehran.

However, the U.S.-led mission has hit a roadblock in its efforts to support the Iraqi government. Both the Iraqi and U.S. government agree that airstrikes have pushed the militants back and the group has struggled to gain territory since airstrikes began. But there will come a point where airstrikes alone will not be enough.

Most of the battlefield successes in Iraq have been coordinated efforts, with Iraqi and Kurdish forces and Shiite militias fighting on the ground and the U.S.-led coalition providing air power. The siege on the village of Amirli just north of Baghdad, when many feared the capital itself might fall, was broken last year with the help of U.S.-led airstrikes and a fighting force of mainly Shiite militias.

Shiite militiamen backed by a coalition air campaign also retook the town of Jurf al-Sukhr, on Baghdad’s outskirts, from the militants in October.

Soleimani, the Iranian general leading the Tikrit operation, was a key player in both of those campaigns. But Iraqi and Kurdish officials and Shiite militia fighters all acknowledge the crucial role the coalition airstrikes played in their modest victories.

With the military operation to retake Mosul planned for as early as April, many are skeptical about whether the Iraqi military will be ready for the fight. Efforts to recruit Sunni tribes — seen as crucial for rooting out the militants from their strongholds — have yielded few results. Training and arming of Iraqi soldiers have also stalled.

The failure so far to make headway in Tikrit does not bode well. Iraqi forces are bogged down on the outskirts of the city, unable to penetrate the extremists’ defenses. On Tuesday, a suicide bomber drove a military vehicle into a checkpoint manned by government forces and Shiite fighters south of Tikrit, killing four troops and wounding 12, authorities said.

The stalemate persists despite assurances from Iraqi Prime Minister Haider al-Abadi that momentum is on Iraq’s side after recent successes in the oil refinery town of Beiji — an operation that received heavy aerial support from the U.S.-led coalition.

The Islamic State group, which controls a third of Iraq and neighboring Syria in its self-declared caliphate, has littered major roadways with mines that slow any ground advance and require painstaking clearance operations before troops can safely move through. Kurdish and Iraqi forces frequently cite bomb-detecting equipment as one of their biggest shortfalls on the battlefield.

The battle for Tikrit is likely to involve Iraq’s first serious urban warfare challenge, involving street battles that Iraqi security forces are not trained for.

Concerns are also mounting over the Shiite militias’ battlefield conduct in a largely Sunni region where some residents are said to have initially welcomed the Islamic State militants as a better alternative to the Shiite-led government in Baghdad. In their earlier battlefield successes, the Shiite fighters often flattened towns and villages so as to prevent Sunni residents from returning home.

Winning over the Sunni tribes is essential because they know the terrain of the Sunni-majority areas under Islamic State control and can fight with and advise the Shiite fighters. But animosity has reached a peak and fragile battlefield alliances could be short-lived once the common enemy is eliminated. And heavy Iranian involvement only threatens to exacerbate sectarian tensions.

Read Next
FACT CHECK: Did Netanyahu exaggerate in US speech?
EDITORS' PICK
‘A greener, cleaner tomorrow’: A how-to guide for Filipinos who want to help with today’s energy crisis
China expands lockdown against virus, fast-tracks hospital
Get exciting deals and discounts when you download the new McDonald’s App
SM continues to send relief assistance to remote towns in Batangas
Countries with confirmed cases of coronavirus
FlipTop rapper Loonie freed on bail
MOST READ
Taal’s sulfur dioxide emission increases
No time for revelry; Tagaytay instead plans for alert level 5
Megan Young, Mikael Daez get married
Palace: US Senate move also made Duterte junk VFA
Don't miss out on the latest news and information.