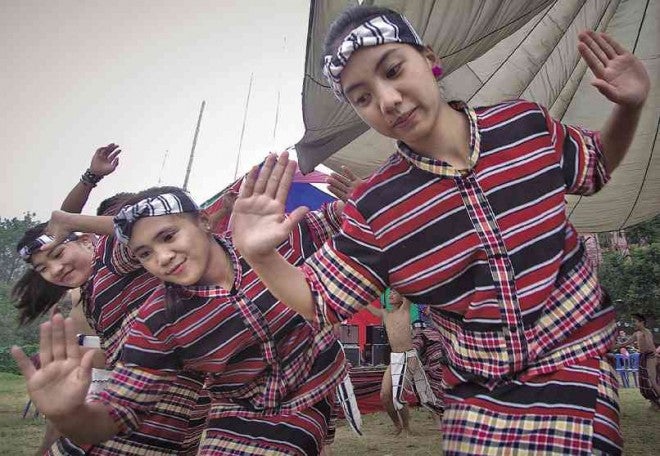 “Ajuran” is Ibaloy for cradle, and the audience connected well with the song about a child when Carantes sang:

(As a child, many things made me cry / But I was consoled by your presence / and your care, my loving cradle).”

As they grooved with the tune, the audience was learning Ibaloy as it should be spoken.

The song is part of an all-Ibaloy album, “Ikul,” which Philippine Military Academy professors Carantes and Gleemoore Makie put together to help popularize the Ibaloy language, recognized as a mother tongue that teachers will use in the K to 12 enhanced basic education program.

“Ikul” uses Ibaloy language as determined by the 2014 Ibaloy Orthography Congress, which involved Carantes, a literature professor, and Makie, an ethics and philosophy professor. Orthography defines how words in languages like Ibaloy are used, pronounced and spelled.

The lyrics, composed by Makie, are examples of spoken Ibaloy that were compiled in an Ibaloy language monograph that he and Carantes produced.

In the monograph’s foreword, the two professors describe the songs as their “modest contribution to current efforts [to build] a valid, standard and accepted Ibaloy orthography borne out of a continuing dialogue with speakers of the language.”

Young Ibaloy have lost the nuances of their language; many of them do not speak the language anymore, Carantes said.

But Ibaloy is a teaching language accredited by the Department of Education that teachers would use to teach grade school pupils about various subjects, he said.

The songs also provide “the material for standard written Ibaloy [to help] the language grow and become more vibrant in its use,” he added.

Carantes gained celebrity status in the 1990s when he and his brothers formed “Bag-iw,” an ethnic rock band that penetrated Metro Manila airwaves with English songs that used Cordillera percussion beats and other instruments.

But “Ikul,” which means “tail,” is the product of Carantes’ role as an academic.

The album features 12 Ibaloy songs with themes taken from the life experiences of the Ibaloy, he said. The rhythm combines the beats of the “solibao” (drum) and “khalsa” (gong) with guitar.

Carantes said he discovered that Makie also wrote Ibaloy poems which inspired him to develop the project in 2014. He said they would spend hours in the studio editing their songs.

“My dream is to compose a song that would help popularize the ‘tayaw’ (Ibaloy dance), which has started to disappear now that fewer clans mount ‘cañao’ (ritual feasts). If we can produce a song that would become popular to this generation, that would be fulfilling,” he said. With a report from Vincent Cabreza