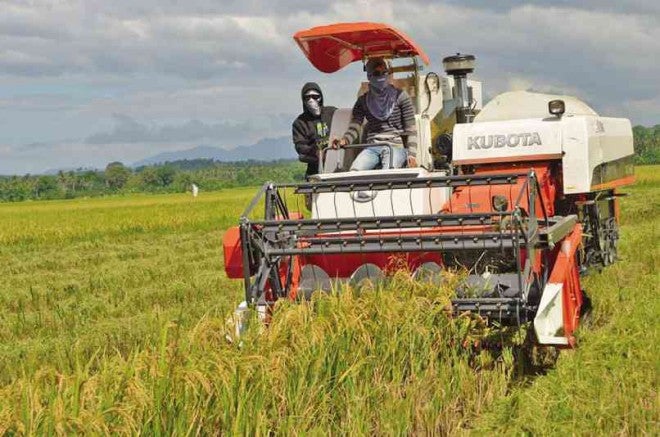 IN SULTAN Mastura town, Maguindanao province, the campaign to improve agricultural productivity continues even as war in other Maguindanao areas drives hundreds of farmers out of their lands. NASH MAULANA/INQUIRER MINDANAO

SULTAN MASTURA, Maguindanao—A continuing cycle of violence in the Autonomous Region in Muslim Mindanao (ARMM) is turning farmers in the region into what one official said was a “vanishing species,” and pushing the region’s agriculture further down, losing up to 10,000 metric tons of rice in just one year of conflict.

War and the displacement of people it brings, according to ARMM officials, are making it tougher to implement programs to increase productivity.

They said, however, that the search continued for ways to improve farmers’ income and the region’s agriculture output.

According to Kadiguia Abdullah, information officer of the ARMM Department of Agriculture and Fisheries, the region lost about 10,000 MT in rice production from 2011 to 2012 alone as a result of war.

During clashes, farmers are forced to flee and abandon their farms, severely affecting production.

Makmod Mending Jr., ARMM secretary of agriculture, said the regional government had been pushing for these new farming methods and technological aid in the hope of keeping farmers from completely abandoning their lands.

These include a partnership with the Philippine Rice Information System (Prism) for the distribution of tablets with printers to farmers and farm technologists to monitor production and determine what kind of inputs are needed to boost production.

Data for modern farming are stored in the tablets, Mending said.

ARMM Gov. Mujiv Hataman said other efforts included support projects, like roads, and a campaign to encourage the youth to go into agriculture by offering scholarships.

Linked with these efforts is a campaign to promote peace to prevent an exodus of residents, many of them young people.

Hataman said rice production in the ARMM could fall sharply in the next 10 years if peace did not become real and permanent.

The average age of farmers in the region was 52 years old and this was alarming since no young farmers were taking the place of the old ones, Hataman said.

Many of the ARMM’s rice-producing communities are suffering from armed conflicts that displaced thousands of people, among them farmers and the youth.

“The situation is such that the farming generation is curtailed by the trend of younger people seeking employment opportunities elsewhere for survival, making farmers a ‘vanishing species’ of sorts in their communities,” Mending said.

He said it was also possible that families of many farmers had been lured to join the Moro rebellion as a result of war atrocities attributed to government forces. Nash Maulana, Inquirer Mindanao