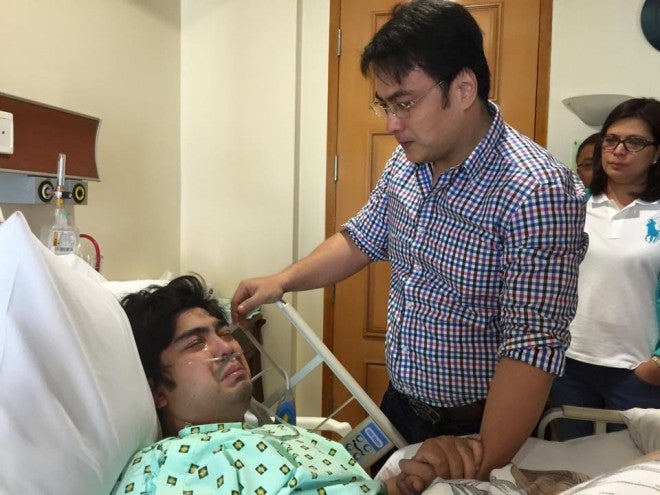 That was what Cavite Vice Governor Jolo Revilla said during his emotional reunion with his father Senator Ramon “Bong” Revilla Jr. Tuesday afternoon at the Asian Hospital and Medical Center in Muntinlupa City.

“Senator Revilla entered the room and he saw his son. He was lying on the bed. The senator hugged Jolo. Jolo said ‘I’m sorry, Papa, I’m sorry’ to which he replied, ‘it’s all right, son, you have to be strong,” Fortun recounted.

The lawyer also said that some family members present in the younger Revilla’s room also shed tears seeing the father and son together.

Meanwhile, Fortun reported that the younger Revilla’s condition has not improved, saying that the vice governor has pneumothorax in the left lung, meaning the said lung has collapsed.

He is also diagnosed with fever and 800 cc of blood has since been drained from his body.

The senator, who is detained due to his alleged involvement in the pork barrel scam, will be in the hospital until 8 p.m., in accordance to the motion approved by Sandiganbayan.

The younger Revilla was brought to the hospital on Saturday when he “accidentally” shot himself while cleaning a .40 Glock handgun