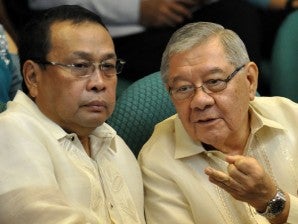 MANILA, Philippines–A powerful group of wealthy lawmakers from the Visayas is blocking two bills seeking the extension of the agrarian reform law, which the Catholic Church hierarchy says is the way out of poverty for a million landless farmers.

Akbayan Rep. Walden Bello said the two pending measures, House Bill No. 4296 and House Bill No. 4375, had barely moved in the House of Representatives due to the reluctance of Speaker Feliciano Belmonte Jr. and Majority Leader Neptali Gonzales II to prod their allies from the Visayan bloc to act on the measures.

“I would say we have a 40-60-percent chance of approval not because we don’t have the numbers. We already have about 60 coauthors for the amendment to Carper,” Bello said, referring to the Comprehensive Agrarian Reform Program Extension with Reforms, which expired a year ago.

“But the House leadership still hesitates to bring it to plenary discussion owing to a lack of willingness to provoke the so-called Visayan bloc,” Bello said in a text message.

Agrarian Reform Secretary Virgilio de los Reyes said President Aquino had certified the notice of coverage (NOC) extension bill and that his department had been actively pushing for this especially after the Senate version had already been passed.

De los Reyes said that although the House had yet to pass the second bill creating the Agrarian Reform Commission, “we are already doing the validation of previously issued emancipation patents and certificate of land ownership awards.”

“We have passed the Senate version of HB 4296,” Senate President Franklin Drilon said. He said the ball was now in the court of the House. “We’re supportive of land reform legislation.”

Malacañang on Monday said it could “persuade” Congress to immediately act on the bills. But presidential spokesman Edwin Lacierda said the priority was on getting more land under the reform program instead of setting up the review commission.

“Let’s look forward, let’s try to cover them. The other House bill is to review, is to look backward, what were the shortcomings? Perhaps our priority is to look forward and ensure that the notice[s] of coverage [are] issued to all properties or all plans, which have not yet been covered,” Lacierda said.

“You are now delving into the legislative responsibility … we can persuade, ask them (congressmen) to hasten it…. Perhaps the bishops can also enjoin the congressional leaders to pass it,” Lacierda said.

Since certifying the bill as a priority in July 2014, Bello said, Malacañang in fact had been “twiddling its thumbs” for fear of antagonizing the Visayan bloc.

Bello said the Department of Agrarian Reform (DAR) itself admitted that bulk of the undistributed private land in the country was in the hands of landlords and corporations in Western Visayas, specifically Negros and Panay.”

“This is the reason he (De los Reyes) admitted that agrarian reform still has not had its acid test, because the best private land in the country is still undistributed,” Bello said.

But while Baguilat said that HB 4296 had 81 coauthors, he conceded that the measure had run into stiff opposition from landed interests. He said he did not understand why the committee on rules had not yet calendared the bill.

The DAR Employees Association president, Antonia H. Pascual, said that as of June 2010, the DAR had distributed 400,000 hectares out of the 1.2 million hectares of farmland covered by the Comprehensive Agrarian Reform Program (CARP).

He said that aside from Negros Occidental Rep. Julius “Jules” Ledesma IV and other lawmakers from Negros, landowners and corporations from other regions in the Visayas and Mindanao were also opposing the bills.

He also said the left-leaning Makabayan bloc also opposed measures because it was advocating the confiscation of land without compensation.

In a two-page letter posted on its website at the weekend, the Catholic Bishops’ Conference of the Philippines (CBCP) urged President Aquino, the Senate and the House of Representatives to act on the two bills.

HB 4296 seeks to renew the authority of the DAR to issue notices of coverage and provide adequate funding for support services to agricultural landholdings that have not yet been placed under the CARP, launched in 1988 by then President Corazon Aquino.

HB 4375 seeks to establish an independent Agrarian Reform Commission that would review the CARP’s accomplishments and investigate violations of the agrarian reform law.

Path out of poverty

The letter, signed by 81 bishops, made an impassioned appeal not to allow the agrarian reform program—centerpiece of a social justice campaign promise by the first Aquino administration—to “die a quiet death” without accomplishing its mission to “emancipate and liberate” the Filipino farmers.

“Not extending the CARP and ensuring the gains of the program is tantamount to disenfranchising at least a million farmers of their right to own the land they till, equitably share in the fruits of their labor and find a path out of poverty,” the bishops said.

They also said roughly 1 million to 1.5 million hectares of land that the DAR claimed had already been distributed were not yet under the control of CARP beneficiaries, making them “suspect as evasions of the law.

Katarungan, a national agrarian reform advocacy group, welcomed the CBCP’s action. “The CBCP’s expression of special concern for millions of landless Filipinos is an added push for their struggle to own the land they till,” said Jansept Geronimo, spokesperson for the group.–With reports from Christian V. Esguerra, DJ Yap and TJ Burgonio in Manila, and Delfin T. Mallari Jr., Inquirer Southern Luzon