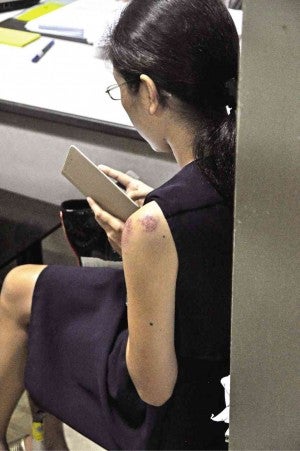 LAWYER Jiecel Tiu files a case of frustrated murder against Pearl Ungab, wife of Ronda town Vice Mayor Jonah John Ungab, after she was allegedly attacked by Pearl with a baseball bat. Pearl has accused Tiu of having an affair with the vice mayor, which Tiu denied. CHRISTIAN MANINGO/CEBU DAILY NEWS

Three days after her controversial face off with a female lawyer who reportedly has an illicit affair with her husband, Mrs. Pearl Ungab Monday decided to break her silence to shed light on the incident.

“Those who saw the actual confrontation between me and Atty. (Jiecel) Tiu will think I was the villain based on how I reacted. But what they did not see was the incident (minutes) before that,” she told INQUIRER in an interview at her hospital bed Monday afternoon.

Mrs. Ungab, who is 7 weeks pregnant, was placed under hospital arrest since last Thursday evening after she purportedly went after 30-year-old lawyer Jiecel Tiu with a baseball bat after suspecting that she was having an extra-marital affair with her husband.

But she denied hitting the lawyer with a baseball bat.

Mrs. Ungab said she went after Tiu not because of jealousy but out of anger after the female lawyer fired pepper spray on her face as well as bumped her and her 2-year-old daughter with the sedan.

“What would be your reaction if your son was purposely bumped by a vehicle? Would you just smile? It’s a mother’s instinct to protect her child. We were supposed to be victims in this case. How come, I’m the one being detained now?” she asked while wiping off her tears.

Mrs. Ungab said she already communicated with her husband through phone and that the latter promised to provide her with the best lawyer.

Vice Mayor Ungab, a lawyer by profession, also sent P200,000 in cash to his wife to pay for her bail bond.

Prosecutor Liceria Lofranco-Rabillas is expected to release a resolution Wednesday on complaint for frustrated murder filed by Tiu against Mrs. Ungab.

Since Mrs. Ungab waived her right to a preliminary investigation, the charges against her are set to be elevated to the court. The prosecutor, however, has yet to determine whether or not to downgrade the charge to physical injuries.

“He (Vice Mayor Ungab) told me that he will give me the best lawyer. And I think he will be the one who shall defend me because as far as I know, my husband is the best lawyer in town,” Mrs. Ungab said.

Asked if she has already forgiven her husband, she said “Yes, I love my husband so much. There’s no problem with that.”

“The problem is this Atty. (Jiecel) Tiu. She destroyed our family and put us all to shame. As much as possible, I don’t want to drag my husband in this issue but Atty. Tiu just humiliated him,” she added.

Mrs. Ungab is contemplating filing countercharges against Tiu as well as seeking her disbarment.

Her family also intends to seek the assistance of the Cebu Provincial Women’s Commission (PWC) to assist her in the case.

“She (Tiu) is my kumare because she’s one of my child’s godmother. But look at what she did.” she said.

Mrs. Ungab Monday granted INQUIRER an interview after she was prodded by one of her lawyers to reveal the whole truth about the incident.

During the interview, she showed the bruises on her left stomach which she allegedly sustained after Tiu bumped her. Her eyes has also been treated after it got hit by the pepper spray.

Mrs. Ungab’s condition as well that of her off spring have been monitored by physicians.

Her parents are currently in the United States.

Past 5 p.m. last Thursday, Mrs. Ungab said she was driving a black Nissan Navarra on her way to fetch her children in a school in Cebu City when she dropped by Centro Maximo Building along D. Jakosalem Street to meet a friend when she saw Tiu.

Mrs. Ungab was accompanied by her 2-year-old daughter, a nanny, and a househelper.

“Our meeting (with Tiu) was actually coincidental,” she said.

Mrs. Ungab said she wanted to “peacefully” talk to Tiu who was rumored to have an affair with her husband.

“When I saw her (Tiu), I called her and asked if we could talk for a while. But she declined. She told me ‘there’s nothing we ought to talk about. What for? Your family is already ruined’,” the wife said.

Mrs. Ungab said Tiu berated and insulted her, prompting her to confront the female lawyer. She said Tiu suddenly took a pepper spray and fired it on her face.

“It was so painful so I decided to run away from her (Tiu). While moving away from her, she moved her vehicle backwards, hitting me and my 2-year-old daughter who waited for me outside,” she said.

Tiu, she said, immediately fled with her car.

Furious with what happened, Mrs. Ungab said she went after Tiu until she found the lawyer’s vehicle along Echavez Extension in barangay Cogon Ramos, Cebu City.

“I got off from my vehicle and approached Tiu. But she again sprayed pepper on my face. I told myself I could not take it anymore. I went back to my car and our househelp handed over to me the baseball bat. I decided to use it since I didn’t have anything to defend myself with that time,” she said.

“I was so mad that I smashed the left passenger window of her (Tiu) vehicle. I never hit her. I do not know how she sustained the bruises she showed you,” she added.

Mrs. Ungab said Tiu got off her vehicle and grabbed the bag which the wife’s house help brought.

“She even accused me of bringing a gun,” she said.

If she had any intention of killing Tiu, Mrs. Ungab said she would not have brought her daughter with her.

Mrs. Ungab said she decided to report the incident to the Fuente Police Station while her mother-in-law brought her daughter to the hospital for treatment after the latter was bumped by Tiu’s vehicle.

She stayed at the police station before Tiu and two other lawyers arrived.

She said she was physically harassed at the police station as PO3 Cliffton Manogura, the desk officer, allegedly put her to the detention cell by force.

Manogura allegedly told her that it was the order of Police Station 2 Chief Wildemar Tiu to put her in prison.

“This Manogura told me ‘we have to detain you because it’s our chief’s order. Our chief doesn’t choose anyone, even if its a lady, he will punch,” Mrs, Tiu said.

“I got so afraid that I went straight to the detention cell. I felt so weak. Imagine, I might get punched if I don’t go inside the jail. I felt so betrayed. I went to the police station to lodge a complaint but I ended in jail,” she added.

Mrs. Ungab said it also took about two hours before he was brought to the hospital for medical examination—a protocol once a person gets detained.

The physician who checked on Mrs. Ungab recommended that she be placed under hospital confinement after she was spotting with traces of blood from her pregnancy.

“She (Tiu) was saying that I attacked her out of jealousy. What should I be jealous for? What happened last Thursday had nothing to do with jealousy. It was about a mother trying to protect her two-year-old child and the child within her,” she said.

Mrs. Ungab declined to elaborate on her husband’s controversy, saying she wanted to focus on her case.

In an interview last Friday, Tiu denied having an illicit affair with Ungab. She said she used to work at the Ungab Gealon and Associates for four years before she decided to voluntarily leave just to pacify Ungab’s wife Pearl.

“I belong to the same law firm with Atty. John Ungab since 2011 but I decided to leave last year because his wife kept on following me. She has been fabricating stories and evidence against me although she never caught me having an affair with her husband because that is really not the case,” she said.

Asked if she had an extra-marital affair with Ungab, Tiu said “never.”

In a comment Vice Mayor Ungab sent to INQUIRER, he said “As much as possible, I want to hold my silence to protect further damage this issue may bring to all parties especially to my children.”

“If indeed they really have a relationship, I believe my brother was tempted by this Atty. Tiu. We were trying to protect the image of my brother but what did Atty. Tiu do? She didn’t even care protecting my brother,” he said.

“We don’t believe that Mrs. Ungab attacked Atty. Tiu out of jealousy. If that’s the case, we, her in laws, should not have been on her side,” he added.