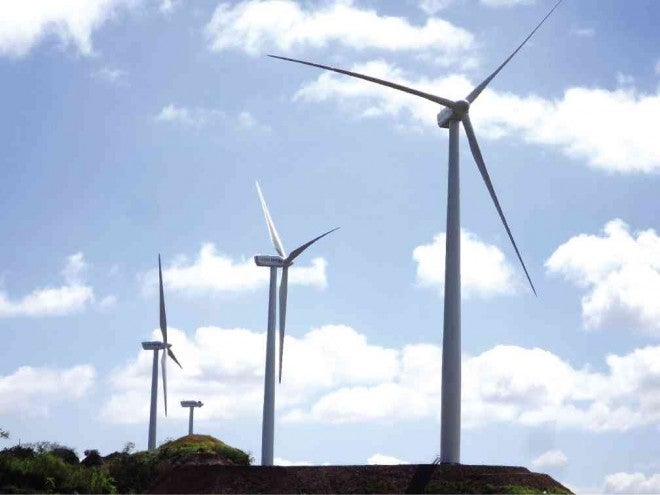 So far, four turbines have been installed on a more than 100-hectare property donated to the Rizal provincial government in Barangay Halayhayin in Pililla town.

The rest of the towers are expected to be completed for operation “by summer,” according to Antipolo City Mayor and former Rizal Governor Casimiro “Junjun” Yñares III.

“In a few months time, all 27 wind turbines bigger than those in the North (Northern Luzon) are expected to become a catalyst for the local economy,” Yñares said Wednesday.

The project proposal for the 54-megawatt wind farm project was started when Yñares was governor and continued by his mother, incumbent Rizal Gov. Rebecca Yñares. It is being undertaken by Alternergy Wind One Corp., a company led by former Energy Secretary Vincent Perez.

Perez, in an e-mailed statement, said “connecting to Meralco’s system was the most feasible and least costly means of dispatching power, without any grid constraint or congestion to the major power load of Luzon.”

The $100-million project was financed by a syndicate of local commercial banks—Banco de Oro, China Bank and Rizal Commercial Banking Corp., he said.

Yñares, said the wind farm should supplement electricity in Metro Manila and Rizal. This, he said, “could lessen the number of hours” without

electricity should there be rotational brownouts during the summer months—from March to May—as predicted by the national government.

Perez, in a text message, however, declined to comment on the looming power crisis as predicted by the current administration, but said the project is

Aside from generating power supply, local officials see the wind farm as a potential tourism boost in Rizal, particularly in Pililla town.

The towers rise high overlooking the Laguna Lake and other Rizal municipalities.

“These are even bigger than the first batch of turbines put up in the North,” Yñares said, referring to the Ilocos Norte wind farm, in a phone interview.

Yñares said several people from around Metro Manila have gone to Pililla to see and take photos of the wind farm, which is closer with “just about a two-hour drive from Metro Manila” than those in Ilocos Norte.