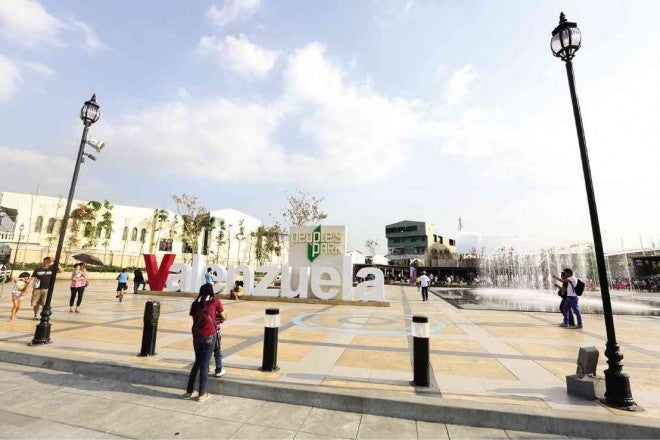 MULTIFUNCTIONAL The newly inaugurated P90-million People’s Park is the first of such scale in Valenzuela City, with features that include an amphitheater (right), picnic grounds, exercise areas, and soon, a P117-million town center that will house restaurants and other recreation spots. PHOTOS BY NIÑO JESUS ORBETA

For lack of big-enough venues, zumba enthusiasts in Valenzuela City often make do with basketball courts, shopping mall parking lots and even empty sections of a cemetery. The local government’s web site is candid enough to state that its “parks and playgrounds” actually count just “1.”

And it must be referring to the recently opened 1.5-hectare People’s Park, the first of such scale in a city not exactly known for sprawling public spaces and where about 30 percent of the land is devoted to industries.

Residents must be so excited about the park that when it was inaugurated on Valentine’s Day, a crowd of 30,000 showed up—
triple the size that the program organizers expected. The site was officially unveiled by Mayor Rex Gatchalian as the city also marked its Charter Day.

Located next to City Hall at the corner of MacArthur Highway and A. Pablo Street, the P90-million park took eight months to build on what used to be idle, grassy land expropriated from Celayo Properties.

Before the People’s Park was conceived, there was the much smaller, wedge-shaped Rizal Park in Poblacion that served as the city’s main plaza. But for decades it was hardly considered a major attraction for the local populace of 630,000.

“For the longest time, people here have been looking for a park where they can relax and the children can play,” said Michael King Urieta, head of the city government’s park events office. “Now they need not to go to Quezon Memorial Circle (in Quezon City) or Luneta (in Manila) to find one.”

“During the time of President Marcos, the plan was to develop Valenzuela into an industrial hub. Most of the streets here are narrow because they are just meant as access roads to factories and warehouses. The city was not master-planned as a residential and commercial area,” Urieta said.

But now, careful planning went into the new park’s design.

A section called the Aero Circle offers both playtime and downtime on artificial turf similar to those used in football stadiums, while a nearby amphitheater can seat up to 1,200 people. There are also an exercise area (recommended for senior citizens), access ramps for people with disabilities, plenty of picnic tables and a cool, wood-shingled pavilion.

Security is monitored through 32 closed-circuit television cameras installed around the park, while 32 park rangers are on hand not only to do patrols but also provide emergency assistance.

Soon to rise in a 2,800-square-meter portion of the park is a restaurant row similar to the Ayala Triangle Gardens in Makati City. Expected to be completed in September, it will be built under a P117-million partnership between the local government and Megabuild JPG Development Inc., Urieta said.

The park was originally set to open in November last year, in time for Valenzuela’s 391st foundation anniversary. But
because the delivery of materials was delayed due to the port congestion in Manila as well as the onslaught of Typhoon “Mario” in September, the opening date was pushed back by three months.

The original plan was also to have the promenades already lined with full-grown trees sourced from Calauan, Laguna province, but since the trees were damaged by the typhoon before they could be delivered, the local government opted instead to plant young trees, like alibangbang.

Two weeks after the park opened, the family of Belma Napili can be counted among its first satisfied patrons. Her 5-year-old daughter Nathalie, for example, has since been dragging her mom to the playground almost every day. “We would spend at least four hours and it’s still not enough for her,” Napili said. “Now we don’t need have to go to the mall and spend a lot on food just so she could play.”

It has also been observed that nearby computer gaming shops have lost many customers to the park. Just ask student Nicole Capulong of Malinta National High School, who now frequent the place with several classmates for a stroll and some “real” games after class. “It’s good that now we have a park where we can rest and leave out all that stress from school,” Capulong said.

Not only locals but also visitors from the neighboring cities of Caloocan, Malabon, Navotas, as well as from Meycauayan, Marilao and Obando in Bulacan province, had discovered the park, Urieta noted.

As the “most ambitious project yet” of the city government, the park was conceived based on “what the people wanted,” he said. “This is not your traditional park that is dotted with monuments. It’s a multifunctional park that incorporates the interests of the people of Valenzuela. Our vision is to provide free, green space for the activities of Valenzuelano families.”