2 llamas returned to owners after running amok in Arizona 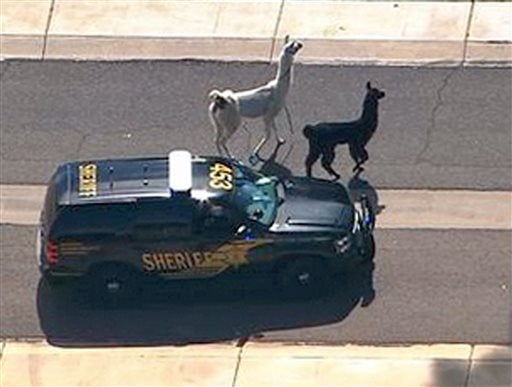 In this image taken from video and provided by abc15.com, a Maricopa County Sheriff’s vehicle tries to herd two quick-footed llamas as they dash in and out of traffic before they were captured, Thursday, Feb. 26, 2015, in Sun City, Ariz., a Phoenix-area retirement community. The llamas thwarted numerous attempts by sheriff’s deputies and bystanders to round them up before they were roped into custody. (AP Photo/abc15.com)

SUN CITY, Arizona — Two quick-footed llamas that dashed in and out of traffic in a Phoenix-area retirement community were captured by authorities Thursday, causing a stir in the streets and on social media.

Television footage showed a large white llama and a smaller black llama darting through the streets of Sun City during the lunch hour. Cars and golf carts stopped in their tracks because of the wayward animals.

The fugitive llamas were part of a trio that was making a therapy visit to residents at an assisted living facility.

Social media users shared running commentary and even photos of people gathered around a screen to watch the llama saga unfold.

Arizona Sen. John McCain and the Arizona Cardinals football team got in on the fun. McCain tweeted that he was “glad that #LlamaDrama 2015 has been peacefully resolved!” The Cardinals tweeted that the team “agreed to one-year deals with the #llamasontheloose,” promising the animals a salary in hay.

Even the North American Aerospace Defense Command tweeted: “Llama had no known connections to ISIS. Appears to have self-radicalized.”

The llama saga also made actor Lorenzo Lamas a trending topic. Lamas was mentioned in more than 270 tweets in an hour, according to social analytics website Topsy. Some on Twitter joked that they heard the “Falcon Crest” actor was on the loose in Arizona.

The animals galloped along the sidewalk, through manicured yards and along street medians. The streets looked more like a rodeo arena as several people tried to lasso both llamas. The llamas thwarted numerous attempts by Maricopa County sheriff’s deputies and bystanders to round them up before they were roped into custody.

The black llama was captured first. The white one was nabbed after two men in the back of a moving pickup truck repeatedly threw out a lasso. It took three men in all to secure the rope. Both animals were escorted to a waiting horse trailer.

The entire ordeal lasted about an hour. Sheriff’s spokesman Brandon Jones said the llamas were returned to their owners. No criminal charges will be filed.