‘It’s our duty to save Earth’ | Inquirer News

‘It’s our duty to save Earth’ 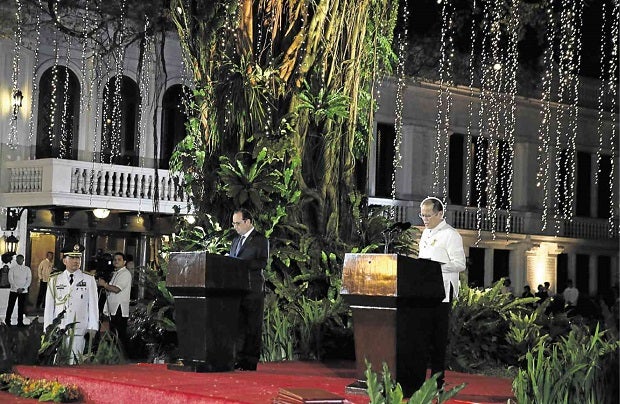 PARTNERS FOR CLIMATE ACTION President Benigno Aquino III and French President François Hollande lead the launch of the “Manila Call to Action on Climate Change” at the Malacañang grounds under a balete tree during the foreign leader’s two-day state visit to the Philippines on Thursday. MALACAÑANG PHOTO BUREAU

President François Hollande of France on Thursday said his visit to Manila was a call to action for mankind to save Earth from the consequences of climate change.

Hollande made a passionate speech for the world to save the planet at a climate change assembly at the National Museum in Manila, his second forum on the first day of his two-day state visit.

People, including his generation, have benefited from the world’s resources, gaining wealth and prosperity, according to Hollande.

So it was their duty to save the planet for the next generation, he said.

In the evening, on Malacañang Palace grounds, President Benigno Aquino III and Hollande launched the Manila Call to Action on Climate Change under a more than a century-old balete tree.

But despite the starless sky, the night was flooded with bright lights.

“We call upon the international community to conclude a universal, equitable and ambitious climate deal, in line with the scientific recommendations set out by the Intergovernmental Panel for Climate Change, to preserve our planet as a livable place for future generations,” Mr. Aquino and Hollande said in the Manila Call to Action.

“From Manila today, we hope to make history together in Paris in December and not simply watch history unfold. We call for climate action,” they said.

The UN Conference of Parties (COP 21) in Paris seeks to come up with a binding and fair climate agreement to limit global warming to 2 degrees Celsius (3.6 degrees Fahrenheit) over pre-Industrial Revolution levels to head off the worst impact of climate change, ranging from fiercer storms and rising seas to extreme rainfall and drought.

In a press conference, Mr. Aquino said that the Philippines was advocating consensus-building among countries to deal with climate change, and that the country intended to make its voice heard.

“The Philippines intends to attend [all forums] and utilize these to voice the sentiments of those who are at the receiving end of climate change,” he said.

As host of COP21, Hollande said that “[w]e will make sure the Paris conference will be a moment of hope,” vowing to fight forces working against efforts to deal with climate change.

In the Manila Call to Action, the Presidents stressed the call for climate solidarity and justice; climate cooperation, and call for financial and technological solidarity.

“We need an agreement negotiated and accepted by everyone and for everyone, an agreement that takes all differences in situations into account, and aims at bridging varying perspectives to hasten collective action,” they said.

“We need an agreement that reduces emissions, creates economic opportunities, and equips us to manage the associated risks that are already locked in for the foreseable future,” they said.

They also warned that the world is “reaching the point of no return on climate change,” such that “we must shift from intentions to actions.”

The Philippines is seen as a frontline state in the battle against climate change, having been battered by relentless storms in recent years that have emerged from the Pacific Ocean and claimed thousands of lives.

These included Supertyphoon “Yolanda” (international name: Haiyan), the strongest storm ever to make landfall, which left more than 7,350 people dead or missing on Nov. 8, 2013.

Hollande is the first French president to visit the Philippines since relations between the two countries were established in 1947.

“We need the Philippines in the fight against climate change,” he said.

Hollande had a 30-minute tête-à-tête with Mr. Aquino followed by an expanded bilateral meeting.

The agreements they signed included a sovereign loan for the Cebu Rapid Bus Transit System, a business operating agreement on the Subic-Clark-Tarlac Expressway and one that would promote the Philippines as a key tourist destination for French citizens.

Speaking at a forum hosted by the Makati Business Club (MBC) earlier in the day, Hollande urged the government and the private sector to build partnerships and alliances, and to support the commitments of France and the Philippines to COP 21.

“We’re here together to talk about the economy and that means also to talk about climate change because both goals cannot be dealt with separately. Everything we can do to deal with climate change and global warming, we can also use to generate more growth, more wealth and jobs,” Hollande said.

He said it would be “a mistake not to consider that we have the duty to tackle global warming (in the interests of our economies).”

Speaking in French (with the media aided by a translator) at the National Museum forum, Hollande said the agreement that would be forged in Paris was a “challenge for the entire world as its future was at stake as well as its citizens.”

“Because the issue of the planet is not only for governments and institutions… we need the commitment of everyone,” Hollande said.

The French leader said he came to the Philippines to seek global support because “we are friends.”

“Unfortunately, this country can best embody climate destruction in the world,” he said, referring to the Philippines being a disaster-prone country that in 2013 suffered the most destructive storm on record, Yolanda.

Calling for a global alliance against climate change, Hollande reiterated the three goals needed to be achieved in the December conference.

First, he called for the signing of an agreement between states “so each can contribute to tackle climate change.”

“It’s by adding all these contributions that we can prevent global warming beyond 2 degrees Centigrade,” he said.

Second, he pushed for a climate change fund to help “fragile and vulnerable countries cope by making investments in renewable energy, for instance.

Hollande said there was a need for $100 million a year until 2020 for this fund.

“The third goal is to pool together business, nongovernmental organizations… to change the present [situation],” he added.

“We have one planet and one life, so we must build this Paris alliance,” Hollande said.

Before Hollande’s passionate speech for global support at the National Museum, Foreign Secretary Albert del Rosario made it clear that France has the support of the Philippines.

“The fight [against climate change] is our fight. It’s crucial and it’s winnable,” Del Rosario said in a speech before Hollande spoke at the forum.

He said that the Philippines was a country facing many disasters as it also faced problems like poverty but, he noted that in all this, Filipinos had shown resilience and determination.

At the MBC forum, Hollande noted that the strong economic performance of the Philippines was attracting companies from around the world to invest in the country.

Some French companies have already been operating here over the past decades, while others have come more recently, he said.

According to Hollande, France has the expertise, technology, services and know-how that will serve the growing requirements of the Philippines, particularly in infrastructure and energy.

“There is a huge need for the Philippines to ensure sustainable development. In infrastructure, some estimates were made and the needs [were seen to be] above $100 billion. There are also major investments needed for renewable energy, as well as for the development of faculty centers and universities, and this is where France can stand by you. France has the expertise that can be made available to you,” he said.

Hollande also urged local businesses to tap the potential trade and investment opportunities in France with the assurance that his government had initiated efforts to make France more competitive and attractive, as well as to make certain mechanisms more flexible.

“I believe that we cannot have an alliance if we do not have trust and confidence. We trust the Philippine economy and we will invest more in the Philippines. We ask you also to trust [and] come to France and work with us. The best way to do this is to set up partnerships and alliances among French and Philippine companies. We can give you all the means and facilities to be able to invest in France,” he said.

On Thursday night, Mr. Aquino hosted a state dinner for Hollande at the Rizal Ceremonial Hall.

At 9:15 on Friday morning, Hollande will fly to Guiuan town in Eastern Samar, one of the communities heavily devastated by Yolanda.

After a meeting with a group of fishermen, he will go around the town on foot to visit a church, a market and a school and then stop by the sea front.

Hollande’s visit came just five months after he welcomed Mr. Aquino in Paris where he paid a nostalgic tribute to the Philippine leader.

Hollande to Aquino: We need your voice