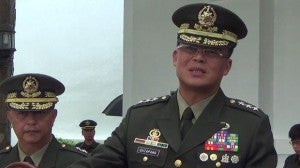 MANILA, Philippines—Following the firefight between Abu Sayyaf group (ASG) and government forces, which killed two soldiers, and wounding 16 others, Armed Forces of the Philippines (AFP) Chief General Gregorio Pio Catapang Jr. on Thursday ordered an “intensified operation” against the terrorist group based in the provinces of Basilan and Sulu.

Catapang said that the AFP seeks to use military and non-military means to address the “Abu Sayyaf problem.”

“This is not a pure military solution to this lingering social problem. I will commit troops to relentlessly pursue the armed bandits who are hiding the jungles and another group of soldiers will work with the local government and non-government organizations in addressing the wide array of community issues that are also attributed to the existence of the ASG,” Catapang said in a statement.

The AFP, through its “Whole of Government Approach” framework, will coordinate with local governments to implement socio-economic, education, and livelihood programs for the benefit of the residents in the strife-torn provinces.

As for the military offensive, Catapang said that the AFP mulls sending more troops to flush out the members of the terrorist group.

The fighting between the Abu Sayyaf and government troops ensued on Wednesday, where five bandits and two soldiers were killed. The fallen troopers were identified as Corporal Lonell Bautista, 35, of Emilio Aguinaldo, Cavite; and Private First Class Ervin Roquero, 23, of Kabankalan City, Negros Occidental.

Sixteen other soldiers were also wounded by shrapnel from the gunbattle.

The AFP Chief said that the sacrifice of the soldiers would not be forgotten.

“I could not describe my pain for losing another brave soldiers in the hands of Abu Sayyaf terrorists. I share the sorrow that is felt by their loved ones. I will make sure that appropriate honors will be given to these fallen heroes. These fine young men will not be forgotten,” he said.