Two years on: forgotten pope sees out days in the shadows 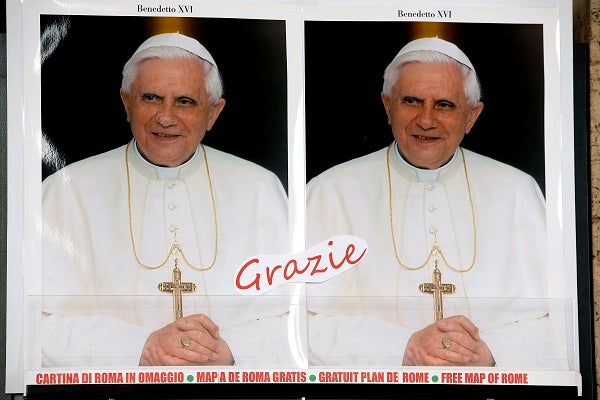 Posters of Pope Benedict XVI are pictured at a gift shop near the St. Peter’s Basilica, at the Vatican, Tuesday, Feb. 26, 2013. Slogan between the pictures reads ‘Thanks’ in Italian. The Vatican on Tuesday answered some of the outstanding questions about Pope Benedict XVI’s future once he’s retired, saying he’ll be known as “emeritus pope” and continue to wear a white cassock. AP

VATICAN CITY, Holy See – It was feared he would become a sort of shadow Pope. Instead he has opted to see out what remains of his life in the shadows.

Two years after becoming the first leader of the Catholic church to resign in seven centuries, Benedict XVI has melted away from public view, even if he remains a benchmark for those in the Vatican who are unhappy with the less traditionalist, more unpredictable regime that succeeded his.

Anyone seeking a gauge of the relative popularity of Benedict and his successor, Francis need look no further than the souvenir stalls in the streets around St Peter’s: the new pope’s beaming face is everywhere while postcards featuring the austere features of the erstwhile Joseph Ratzinger are rapidly becoming collector’s items.

Benedict formally retired on February 28, 2013, leaving the Vatican in a white Italian airforce helicopter for the papal retreat of Castel Gandolfo, where he spent a few months recuperating before returning to the confines of the Vatican and taking up residence in a former convent.

Two weeks after the helicopter ride, Francis was elected. Two years later, the first Latin American pope is a global superstar, a natural and decisive leader who has been credited with shaking up the Vatican, breathing new life into Catholic teaching and bringing the faithful flooding back into the arms of the Church.

Whether being eclipsed so comprehensively rankles to any extent with Benedict is anyone’s guess. But there has been no hint of that in the handful of public or reported statements to emanate from him over the last two years.

A year ago he was quoted as saying that his decision to step down had been the product of a mystical experience and that Francis’s confident leadership had helped him understand why God had willed him to step aside.

He wrote to Italian newspaper La Stampa to dismiss a claim that he had been forced out against his will: which, were it true, would invalidate Francis’s status as the leader of the Church.

There has also been much speculation that Benedict quit because he was on the verge of a nervous breakdown, unable to cope with the pressure of the top job in an institution beset by a series of problems ranging from pedophile clerics to financial scandals surrounding the Vatican bank.

The leaking of his personal correspondence by his butler Paolo Gabriele was said to have left Benedict deeply dismayed, the resulting court case having lifted the lid on a Vatican hierarchy beset by corruption, nepotism and fierce internal rivalries.

On all those questions however, the now Emeritus Pope has maintained a discreet silence, as he promised he would at the time of his departure.

Whether he genuinely approves of Francis in terms of style and/or substance remains unknown.

But what does seem clear is that the 87-year-old seems to be in better health now than he was when he made his shock announcement to cardinals that he no longer had the strength of mind or body to carry on.

He is a little unsteady on his legs at times but not alarmingly so for a man approaching his 88th birthday.

And intellectually, according to Ganswein, he is as sharp as ever, having recently produced a theological text on questions of truth for the benefit of Vatican scholars.

Francis has insisted there is no friction between the two popes.

“The last time there were two or three popes, they didn’t talk among themselves and they fought over who was the true pope,” he joked in July 2013.

And there was a flash of affection when the new pope said of the unusual situation of having two popes living so close to each other: “It is like having a grandfather – a wise grandfather – living at home.”

But Vatican expert Andrea Tornielli says no one should be in any doubt as to who is the boss. “Benedict is very discreet. If he appears in public it is at Francis’s request.”

Filipino Catholics saddened by Pope’s resignation, to pray for his recovery