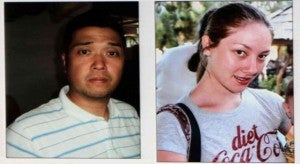 MANILA, Philippines — The Department of Justice (DOJ) has found probable cause in filing a case for parricide against the wife of murdered international race car driver Ferdinand “Enzo” Pastor.

In a 13-page resolution, the DOJ said there was enough evidence to charge Dalia Guerrero, 28, in the killing of Pastor on June 12, 2014, in Quezon City. He was shot to death at the corner of Congressional and Visayas Avenues while on his way to a car racing competition in Pampanga.

He succumbed to gunshot wounds in the head, neck and arms.

De Guzman is accused of masterminding the killing.

“[I]t is respectfully recommended that the attached informations for violation of Article 246 (Parricide) and Article 248 (Murder) of the Revised Penal Code be filed against respondents Dahlia Guerrero Pastor and Domingo De Guzman III y Villaruel, respectively,” the DOJ resolution said.

The DOJ said that while there was no direct evidence against the two, it pointed to “interlocking circumstantial evidence that would point to their connivance in the commission of the crime.”

Among the “interlocking circumstantial evidence” cited by the DOJ was the testimony of housemaid Chona Domen who gave details of the supposed illicit relationship of Guerrero and De Guzman.

“For purposes of establishing conspiracy and absent [of] any evidence, motive plays an important role,” the resolution stated.

The prosecution also pointed to the testimony of alleged gunman policeman Edgar Angel who said De Guzman told him to kill Pastor for allegedly beating Dalia.

In an extrajudicial confession, Angel claimed that he met De Guzman and Guerrero in the Port of Manila and instructed him to kill Pastor the following day.

“Respondent Sandy provided the means for the execution of the plan; respondent Dalia supplied the information on the exact location of Pastor,” the DOJ added.

Likewise, the DOJ said Dalia’s refusal to appear during the preliminary investigation of the case could be taken against her since “flight is indicative of guilt.”

Also, she did not submit a counter-affidavit to refute the charges against her.

Instead, her  lawyer submitted a motion to dismiss which, according to the DOJ, could not take the place of a counter-affidavit.

In his counter-affidavit, De Guzman, insisted that the police failed to present enough evidence against him.

He said the police relied only on the statement of Angel, who later retracted his claims.

In his confession in August 2014, Angel said he was hired by De Guzman to kill Pastor in exchange for P100,000.

But in his counter-affidavit submitted to the DOJ later that year, Angel said his confession was merely a “script”  written by the police.

De Guzman pointed out that Angel’s retraction should be considered and upheld given the “special circumstances” in the case, adding that the legality and validity of his original and initial extra-judicial confession were doubtful.

Ultimately, the DOJ prosecutors disregarded the defense of De Guzman.
“All the foregoing circumstances, to our mind, lead to a reasonable inference of respondents Sandy and Dahlia’s probable participation in the crimes of murder and parricide, respectively,” the DOJ resolution stated.